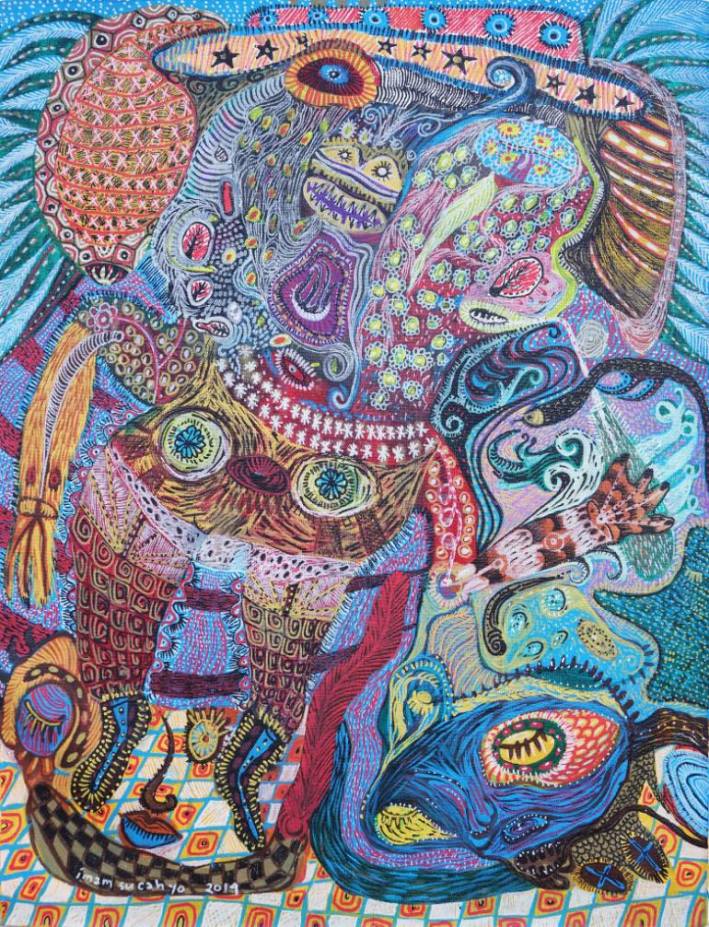 In 1919 German psychiatrist and art historian Hans Prinzhorn (1886 – 1933) was assigned by the psychiatric hospital of the University of Heidelberg an unconventional task – to expand the hospital’s collection of art created by the mentally ill. When he left after a period of two years the collection had grown to more than 5000 artworks. The following year in 1923 Prinzhorn published his first, and destined to become highly influential book, Bildnerei der Geisteskranken (Artistry of the Mentally Ill).

Richly illustrated with wonderful, yet unorthodox artworks the book ignited the fascination of a few French avant-garde artists, while the art became the catalyst for the Art Brut Movement, founded in 1948. Nearly a century after Prinzhorn’s book was published, Art Brut, or what became known in the 1970’s as Outsider Art, has taken the art world by storm. 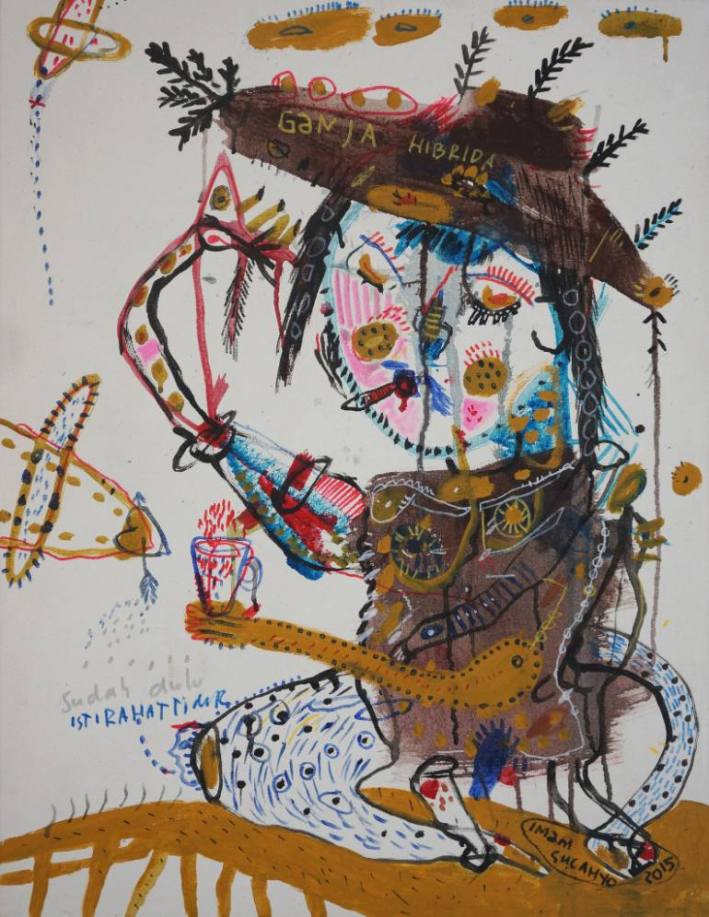 Enthusiastically embraced by the contemporary art world a succession of art fairs, biographies, retrospectives and collections have sprung up in Europe and North America during the past decade. Now this exciting genre is beginning to receive attention here in Indonesia.

The origins of Art Brut (works that were in their raw state, uncooked by cultural and artistic influences) may be traced to Jean Dubuffet (1901-1985) who understood how works by psychiatric patients fulfilled certain Surrealist ideals, in that they seemed to flow directly from the subconscious mind. Aware of the stigma attached to ‘insane’ or ‘psychotic art’ Dubuffet required a more dignified term in order for the refined cultural circles of the time to accept a collection of works by lunatics. Along with Surrealist artist André Breton, and critic Michel Tapié, together they wrote the Art Brut Manifesto in 1947. Outsider Art, coined in 1972 as a recasting of Dubuffet’s term into the English language, is the label that has stuck ever since. 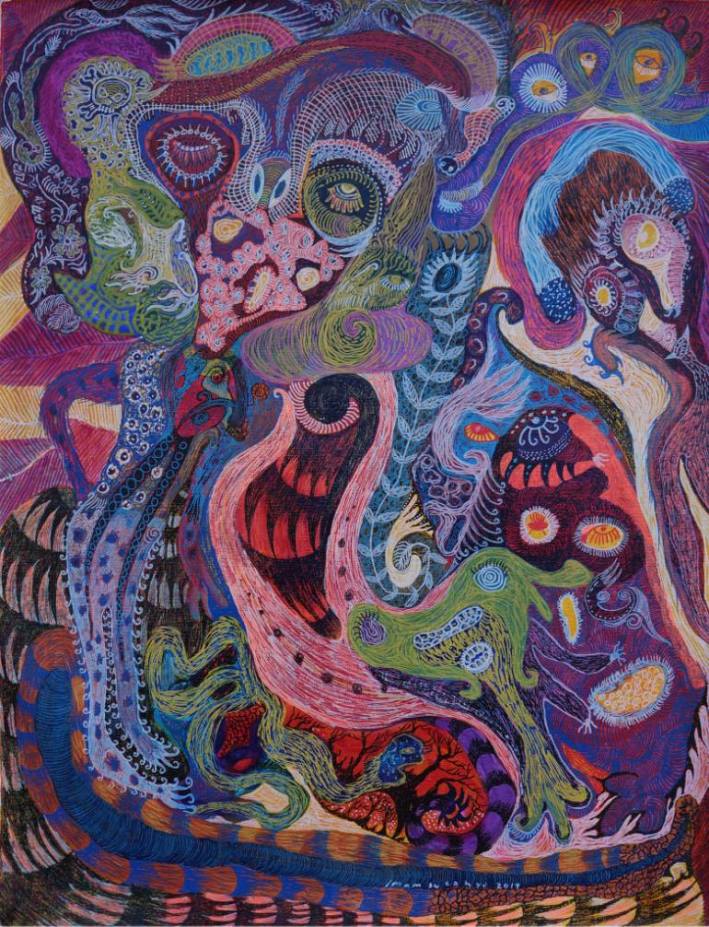 While the definition of this style has been a constant source of debate it was generally accepted that it’s creators are not only untrained but often had little concept of a gallery or even any other forms of art other than their own. The art had no relation to developments in contemporary art at the time, yet it was the innovative and powerful expressions from a variety of individuals who existed outside recognized culture and society.

The profile of an Outsider Artist often includes a traumatic childhood, a history of institutionalization (orphanage, asylum, prison), a stunted education, subsistence jobs, yet a person with a ceaseless drive to create art. The summary is completed by a discovery story; a tale of someone with cultural connections then bringing the outsider into the art world. 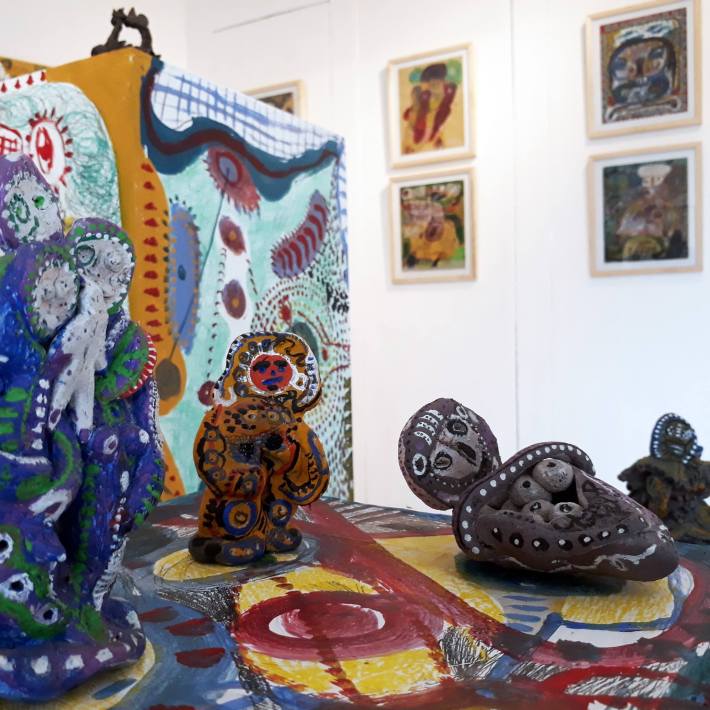 Imam Sucahyo’s life has been a series of ongoing struggles that inspire his prolific creativity. A self-taught artist born in Tuban, East Java in 1978, Imam’s first encounter with the art world was through a neighbour who was a painter. His imagination was sparked at a young age, however, when at elementary school he observed images of paintings by the Indonesian expressionist master Affandi in a library book.

Affandi’s unrestrained freedom would become a potent stimulant for Imam to explore his eccentric painting style. Intuitively he followed his own path into art making while being rejected by the local art community that favoured only conventional styles. During adolescence, with no interest in attending school and influenced by his peers Imam started to experiment with drugs and alcohol. His years of abuse led to psychosis, hallucinations and paranoia. Art became Imam’s sanctuary to calm his troubled mind. 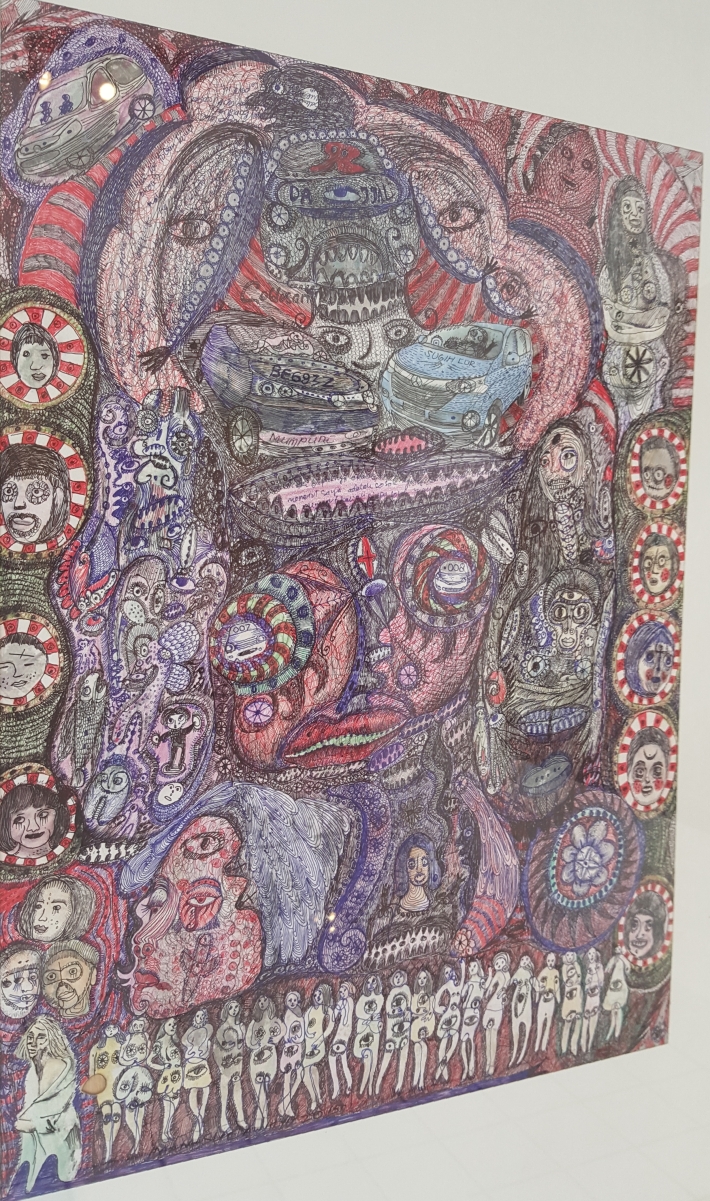 In his early 20’s confronted with poverty and other issues, Imam had to endure sudden family tragedies. In order to cope with suffering and loss he often avoided social interaction, eventually impairing his ability to verbally communicate. Picking up odd jobs here-and-there in various cities helped sustain his life, all the while art was his foundation, a tool of reconciliation, his visual diary recording every event of his journey, both good and bad. Without it, Imam may have become lost in his self-imposed exile. One of his favourite past times was listening to the local folklore, these stories would then merge with his own experience into his art.

“Art is the most loving place, accepting of all my flaws. It accommodates my feelings wholeheartedly, and never demands or requests me to repay that which has been given to me,” Imam said. “Devotion grows so we may complete each other and I can merge as one with my art. My work is a learning place and a mirror so that my life is more meaningful. My art is my pal who securely guides me through every day.” 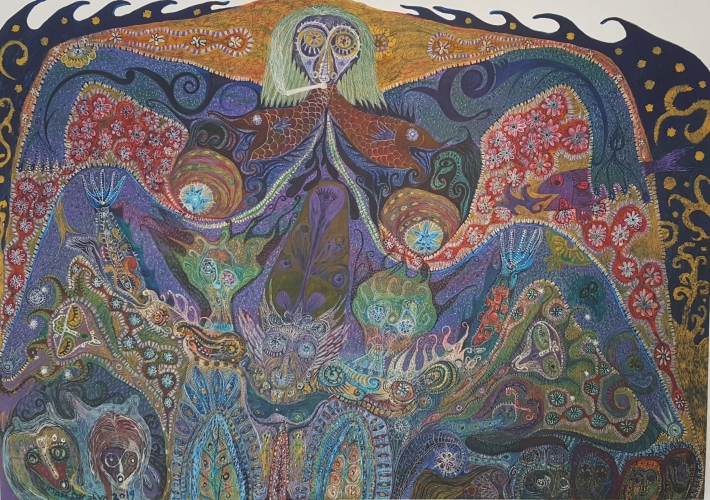 Contemporary artists Djunaidi Kenyut grew up on the streets of Surabaya, is a long time friend of Imam’s, and he is the co-founder of Cata Odata Art House in Ubud, Bali. Kenyut has been a pillar of support during Imam’s artistic journey, and three years ago, Kenyut along with his partner have taken on the responsibility of managing Imam and introducing his work to the international art world.

The phenomenal rise of social media portals Facebook and Instagram have within in a few years enabled a new virtual art world to thrive outside of the highly competitive traditional world of galleries, museums, dealers and hardcopy print media. This has opened the door for many artists, especially here in Indonesia where the art infrastructure is lacking and many have difficulties entering the gallery system, along with finding opportunities to exhibit their work. 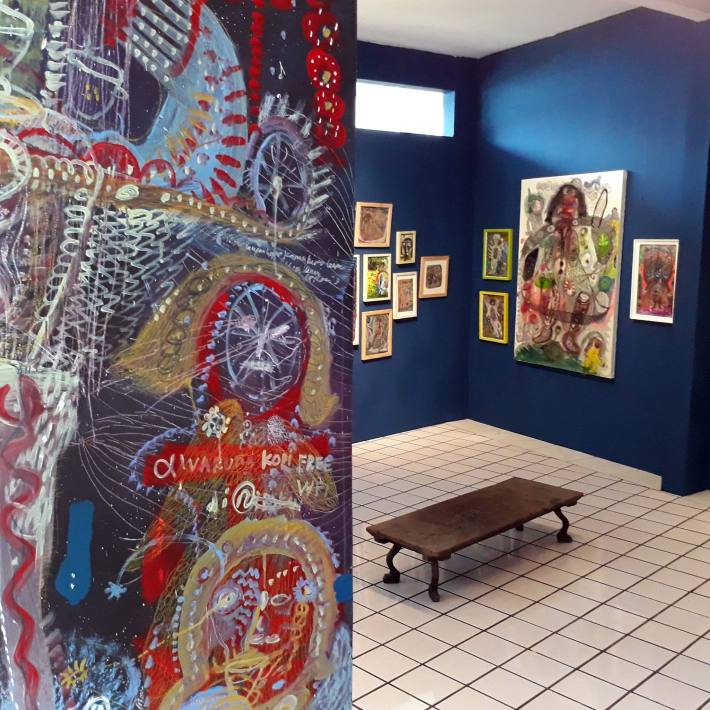 Imam’s memories and ideas come alive in Jagat Mawut (Ravaged World), a collection of over seventy paintings, installations and sculptures feature in his first solo exhibition in Indonesia. Imam’s thrilling and potent art is testament to the wonders and magnificence of creativity, highlighting the resilience of the human spirit. Open 3 October at Cata Odata, this excellent show continues until 4 November. 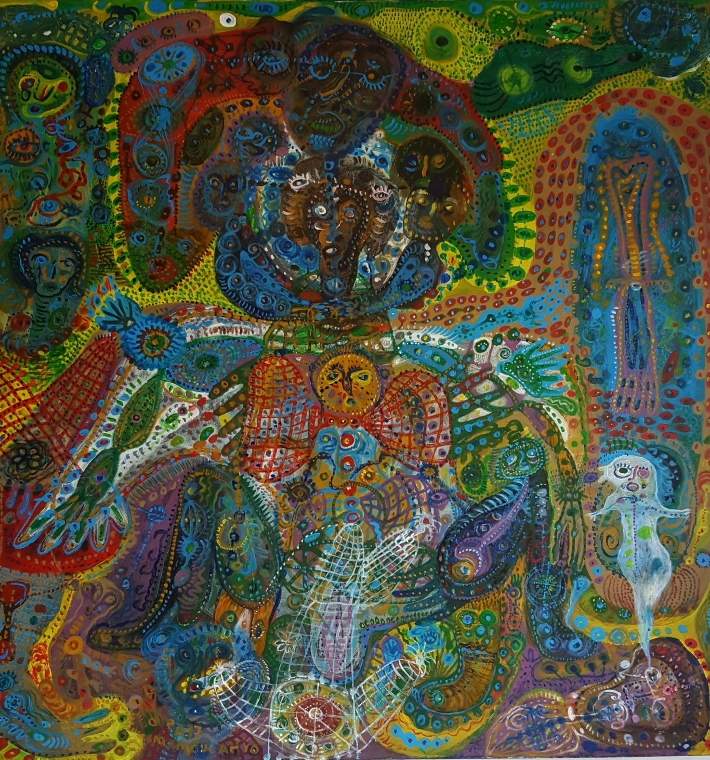 Open Monday to Saturday 10am – 7pm

Opposite the Pura Dalem Temple,