Art auctions are an exciting and accessible way to grow your collection. For the curious observer and new buyers auctions are fascinating processes that give insight into the art world that is often perceived to be opaque, mysterious, and even intimidating. Auctions allow opportunities for new buyers to enter the market often at amounts well below gallery prices and cheaper than purchasing directly from the artist’s studio.

Larasati Auctioneer’s upcoming 8 October 2017 Traditional, Modern and Contemporary Art auction to be held in Ubud, Bali offers eighty lots of fine art for sale in varying categories including Indonesian and Balinese art, and catering to the budgets of new buyers, intermediate collectors, and the connoisseurs.

Since February 2016 real-time Internet bidding has been available through the Larasati website opening the auction to a global audience. Real-time Internet accessibility allows prospective buyers to follow along observing hammer prices to assess the situation of the market and level of interest of a certain class or individual lot, while also allowing for bidding strategies to be revised.

A feature of the twice-yearly Larrasati auction is always the fascinating array of Balinese modern traditional paintings available for sale; the genre that evolved through the influence of the Pitamaha Artist’s Association established in 1936 in Ubud to oversee the growth of this art style catering for new burgeoning markets that quickly developed during the first wave of tourism to embrace Bali.

Two works of interest by masters of the Pitamaha are Lot 565, Perebutan Tirta Kamandalu by Anak Agung Gde Meregeg (1912-2000) with an estimated price between Rp.60,000,000 – 80,000,000, and Lot 575, Sang Hyang Jaran by Tjokorda Oka Gambir (1902-1975) with an estimated price between Rp.20,000,000 – Rp. 25,000,000. These paintings offer excellent buying opportunities if purchased within the undervalued estimated prices. Both artists have had enormous influence on the development of Balinese art, Gambir one of the founders of the Ubud School of painting, while Meregeg, one of the first students of Walter Spies (1895-1942) is the grandfather of the celebrated Ubud painter A.A. Anom Sukawati. 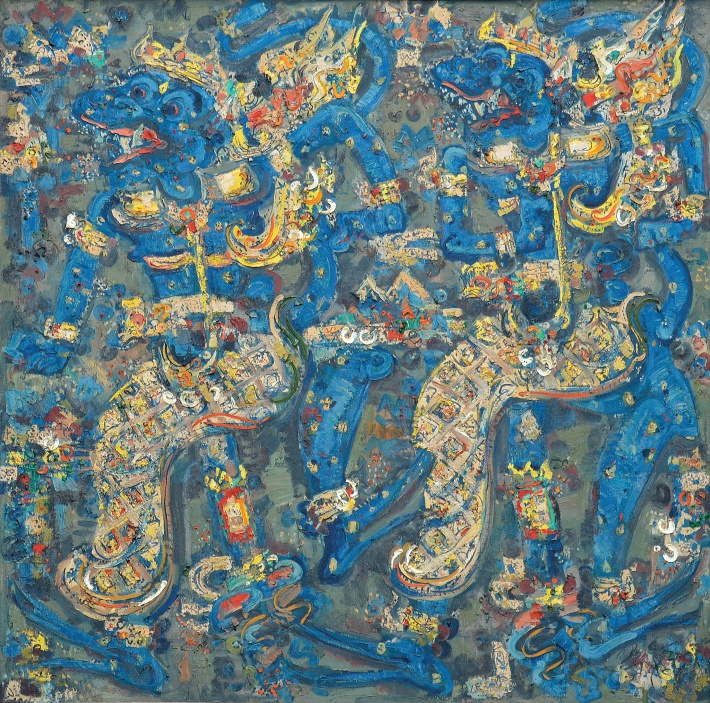 The recent passing of pioneering modernist Nyoman Gunarsa in early September was an enormous loss to the Balinese art world. Born in 1944 in East Bali, Gunarsa was instrumental in helping forge new paths in Balinese aesthetics with his own dynamic interpretation of the wayang figures of Classical Balinese painting. His legacy as an artist, art lecturer and art community leader – one of the icons of the island’s cultural landscape – however, will continue on through the generations of artists he has inspired. Lot 559, Subali & Sugriwa is an excellent work by Gunarsa that will attract attention and has an estimated price of between Rp.45,000,000 – 55,000,000.

Prospective buyers bidding over the phone, or via real-time Internet bidding who are unable to attend the previews days or auction are advised to contact Larasati and enquire about the colour reproduction accuracy of the images contained within the online catalogue to ensure that what they wish to purchase can be realistically appraised. The absence of reference to the condition of a lot in the catalogue description does not imply that the lot is free from faults or imperfections, therefore condition reports of the works, outlining the paintings current state and whether it has repairs or over painting, are available upon request.

Provenance, the historical data of the works previous owner/s is also important and is provided. An information guide including before the auction, during the auction and after the auction details, including conditions of business, the bidding process, payment, storage and insurance, and shipping of the work is also available. A buyer’s premium is payable by the buyer of each lot at rate of 22% of the hammer price of the lot. 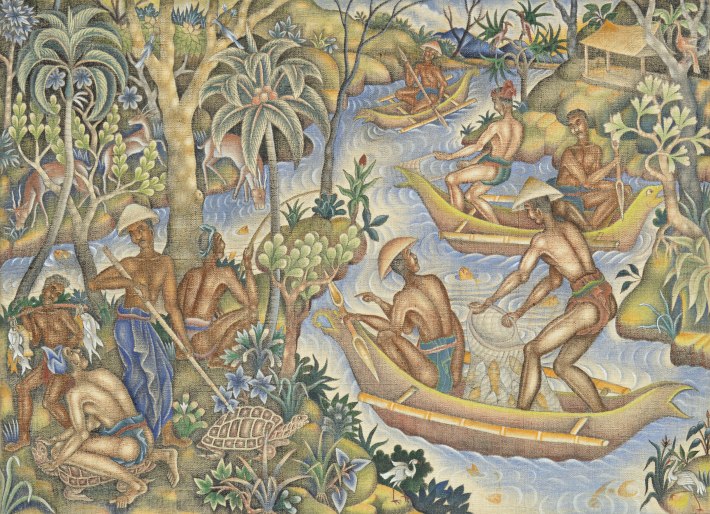 Open to the public at the Larasati Art Space in the Tebesaya Gallery the auction starts at 2:30 pm Sunday 8 October, while viewing begins from 11am 6 Friday.

The online catalogue is available at: www.larasati.com