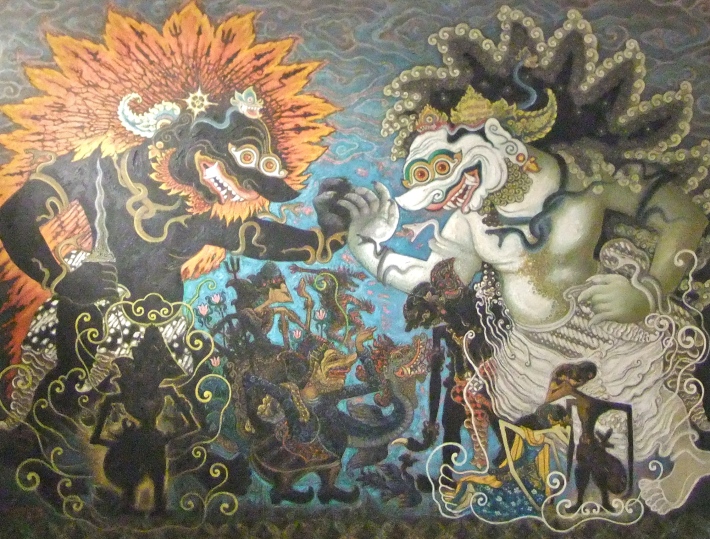 One of the most endearing features of Javanese culture is the Wayang Kulit shadow puppet theatre. My first experience of a performance was filled with awe and delight, and to this today I remain fascinated by this art form.

A cast of curious mythical characters: gods and demons, kings and soldiers, villains and heroes come to life behind a large white screen, the shadows figures the focus of our attention. Accompanied by a traditional ensemble, the dalang, or puppeteer is the master of ceremonies and the manipulator of the figures and creator of their voices. The characters bring to life ancient tales from the sacred Hindu +Buddhist texts, along with localized stories, old and new. The drama, tragedy, humour and suspense keep audiences entertained for hours on end.

“As a child I was obsessed with the Wayang Kulit,” says Javanese painter Lugiono. “I watched the performances day and night. I recalled many times when I struggled to keep me eyes open, then I fell asleep, only to wake later and continuing watching.” Born in Yogyakarta, the cultural capital of Java in 1953, three years after the formation of the Republic of Indonesia, and before television access for the masses, “Wayang performances along with comics, were central to children’s visual world, especially mine,” Lugiono adds. 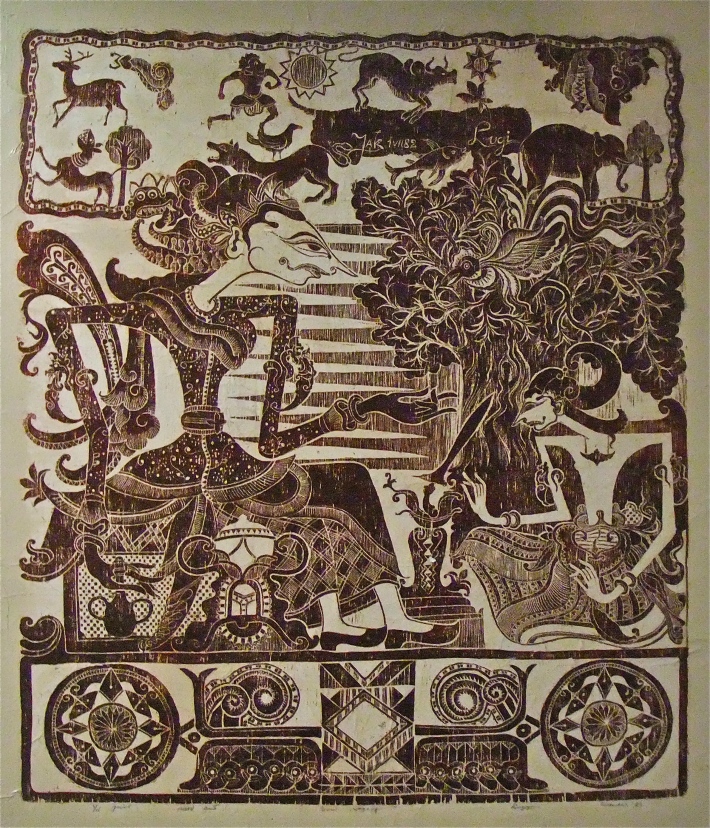 A highly responsive form of social commentary and criticism, emphasizing local issues of both interest and concern the Wayang theatre’s origins come from India and China. Absorbing various religious and socio political influences in the narratives and forms the Wayang has been evolving in Indonesia since India’s initial presence about 2000 years ago. Long before the Wayang Kulit shadow puppet theatre, however, Wayang Berber, in which the narratives were painted on long scrolls and then slowly rolled out in front of the audience, was predominant.

“My Name is Wayang” brings together two Javanese artists, Lugi Lugiono and Bambang Adi Pramono in an exhibition of paintings and sculpture at Rumah Topeng dan Wayang Setiadarma in Mas, Ubud, open from 19 December 2015 – 15 January 2016. Setiadarma boasts an extraordinary collection of wayang puppets and traditional masks housed in beautiful Javanese traditional teak wood buildings, and the exhibition pavilion at Setiadarma is the perfect venue to display this body of work. The colour and warmth of the raw timber grain walls, ceilings and floor, along with the architectural aesthetics compliment and highlight the works; the visitor is granted an authentic Javanese cultural experience. 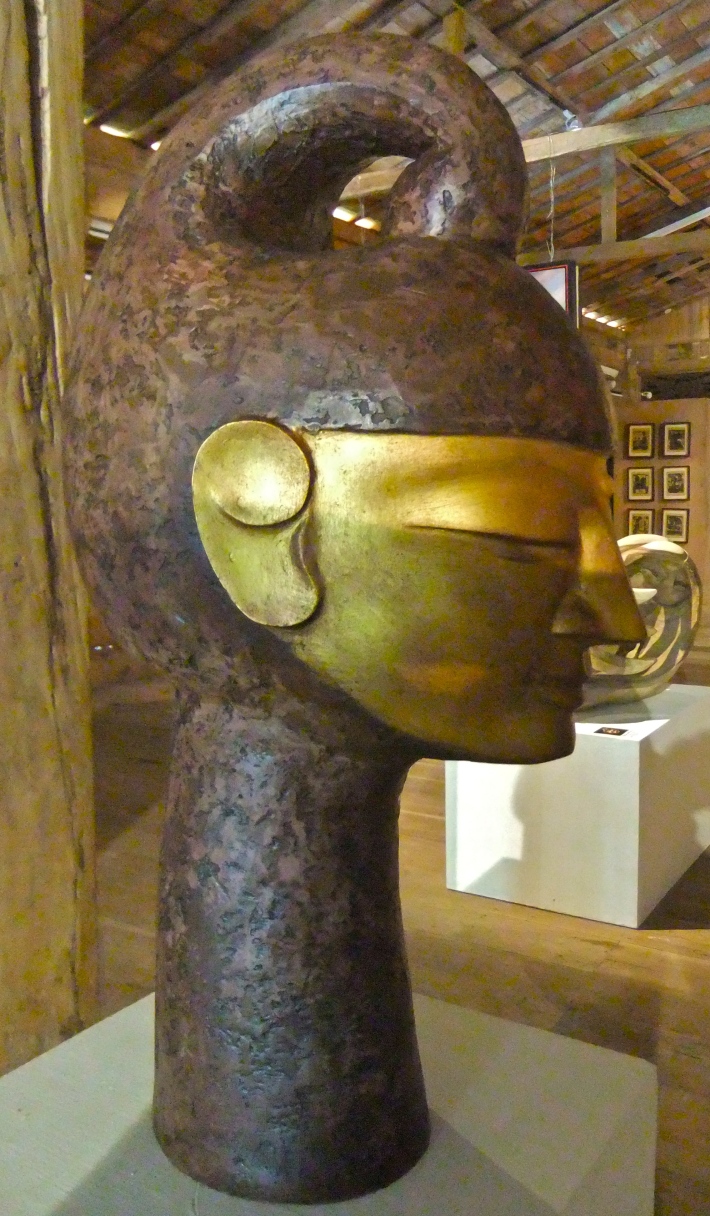 Featuring over seventy works, paintings in mixed media and oil upon canvas and carpet surfaces, hard board and wood cut graphic prints, along with sculptures in mixed media, artificial marble, aluminium and wood; colour and form come to life via the creative prowess of the two artists who where once class mates studying fine art in Yogyakarta. Lugiono studied at the High School of Fine Arts (SSRI) Yogyakarta 1971-74 and then at the Institute of Fine Arts (STSRI-ASRI) Yogakarta, 1974-1976. He currently lives and works in Bekasi, Jakarta. At the age of 22 his talent was already apparent, being awarded the “Affandi Prize” for visual art at ASRI Yogyakarta in 1975, while recently, 2007, the winner of the Asian Fellowship at the 14th Annual Freeman Foundation, VSC, Johnson, USA. In 2013 Lugiono was selected in Indonesia’s largest art prize, the UOB Painting of the Year in Jakarta.

Adi Pramono (b. 1955, Sidoarjo, East Java) on the other hand lives and works in Bali. A well known, and award-winning sculptor, he studied at STSRI-ASRI Yogyakarta in 1976 while also giving lectures on sculptor from 1983-90 at the Indonesian Institute of Art ISI Yogyakarta. Nowadays he regularly teaches sculpture classes in various mediums to local and foreign students at his Kayu Gallery Studio 15 minutes south of Ubud, Bali. 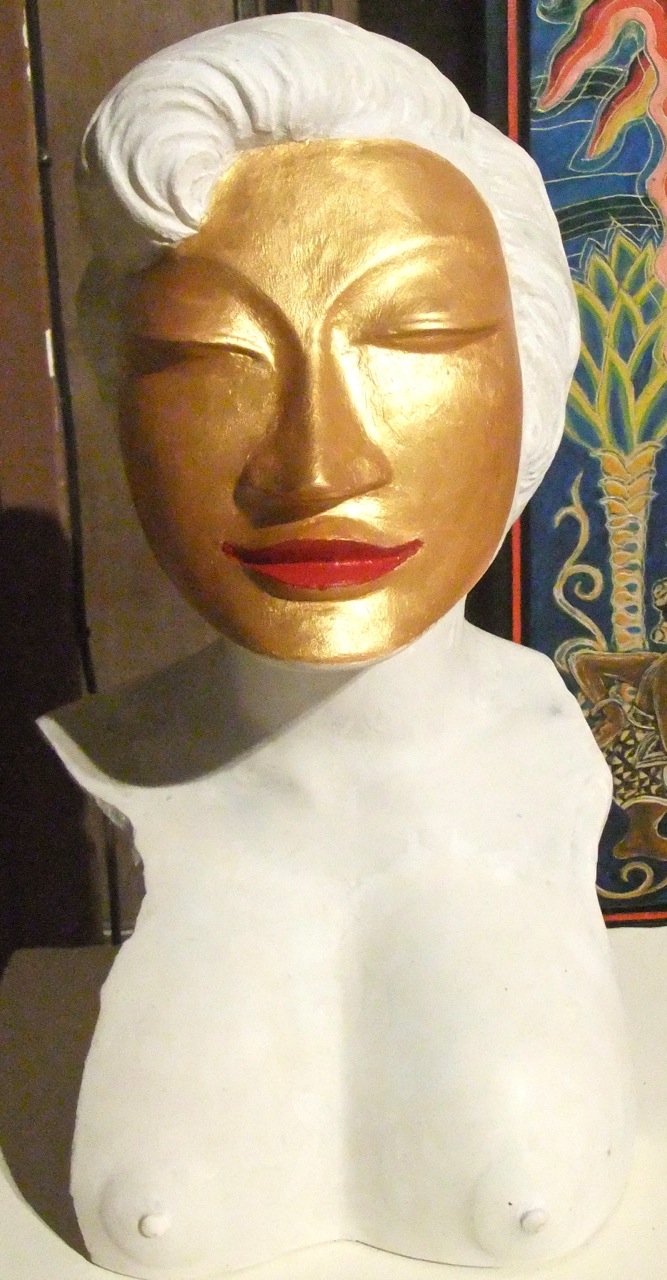 Despite numerous works by Adi Pramono, made over recent years, make no reference to the exhibition’s theme, what they do reveal is the artist’s array of expressive styles employing multiple forms of media. “Balance” 2015 is an aesthetically beautiful and flowing abstract form forged from local Suwar wood. Wood grain rhythms compliment curving forms while revealing the artists eye for harmony. Adi Promono’s approach to many of the Wayang characters he recreates is to gift them with modern stylized sensibilities. “Harjuna Mencari Cinta” is defined by its striking pointed nose, as is “Dewi Sembadra Menanti Cinta” yet the form is complimented with a golden face, vibrant red lips and glowing white breasts.

Lugiono retrospective exhibition includes paintings dating from1983 and hard board cuts printed on canvas going back to 1975. A gifted colourist, his works are his ability to construct equally as powerful compositions. The enormous 180 x 270 cm oil on canvas painting “Semar Onthok-Onthok” 2015, centrally positioned on the wall at the rear of the pavilion is the highlight of the show. Dynamic colours bring to life a milieu of forms and scenery that flow and intertwine together creating a vibrant composition in which Semar, regarded by some as the most sacred figure in the Wayang set, is the central character. 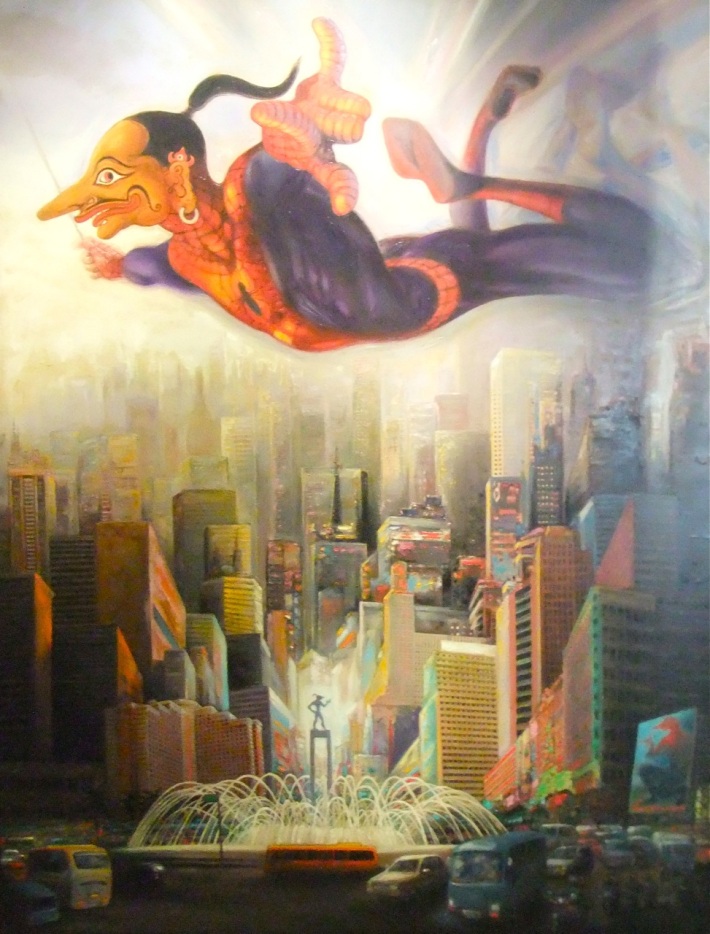 Petruk is one of the four Punokawan (clowns), together with Semar (the leader/father figure), Bagong, and Gareng. They are portrayed living together as a harmonious family within the Wayang andprovide comic relief, but also serve to speak to the audience and convey ideas of the dalang, including social criticism. “The Legend” 2009, features Petruk, complete with a Spiderman costume flying over central Jakarta restoring a sense of national pride to Java’s mega city.

Not only is the artist adept at constructing large and complex compositions with ease, he is also a brilliant colourist. In “Wuku Kulawu Bathara Sadana” 2007, Lugiono strips the composition down to its core structural elements to highlight figure and form, yet it is his choice of vibrant colour that speaks volumes.   Again colour is the feature in “Wuku Kuruwelut” 2013, contrasting black and gold against one another, along with measured areas of white, creating an aesthetically pleasing and powerful work. Lugiono’s array of graphic art on display again reveals his immense skill. Be it in adopting geometrical shapes to create compositions of perfect balance such as “Kinari-Kinari” 1981, or simply in the power of juxtaposing black against white backgrounds in order highlight the strength of his compositions. 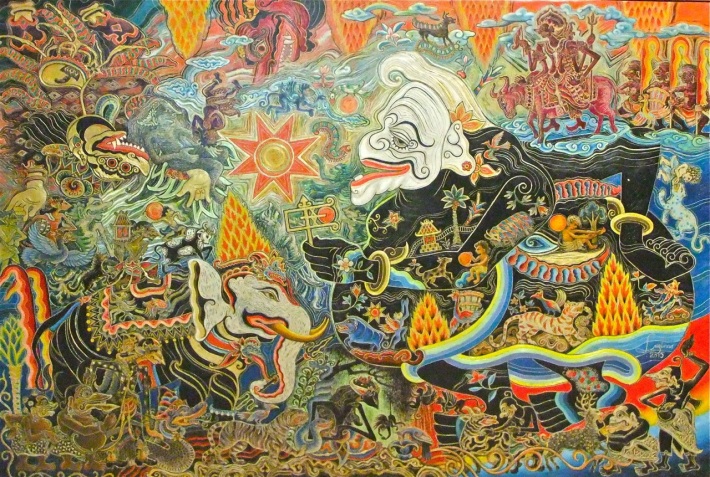 On display are also a number of Lugiono’s landscape works that feature compositions of beautiful flowers and trees. These are some of the more commercial works he creates to sustain his life as an artist, yet his passion is creating his beloved Wayang characters.

“My Name is Wayang” is both a heart warming and entertaining exhibition, revealing the talent of two fine arts while highlighting a medium that has become the essence of Javanese culture, within its great tradition of story telling and literature. 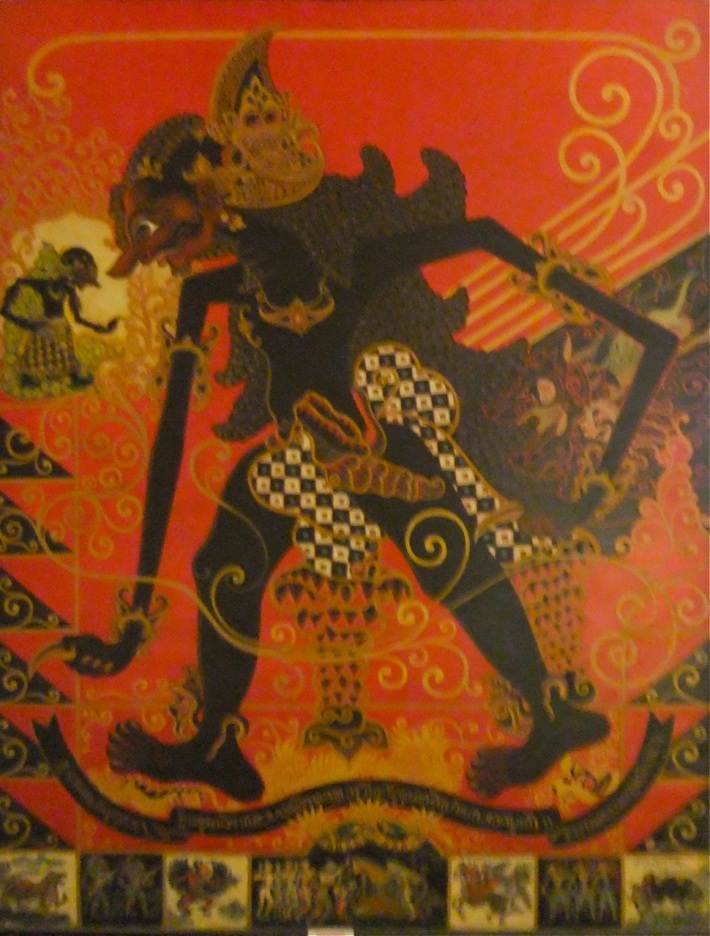 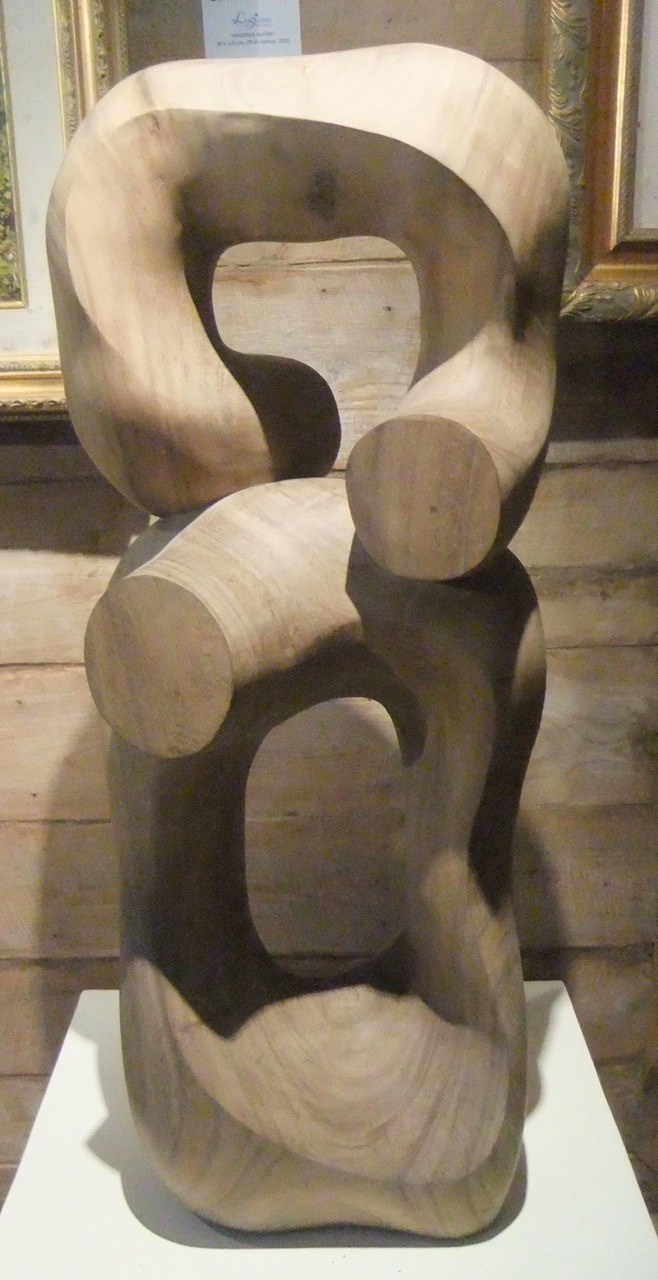 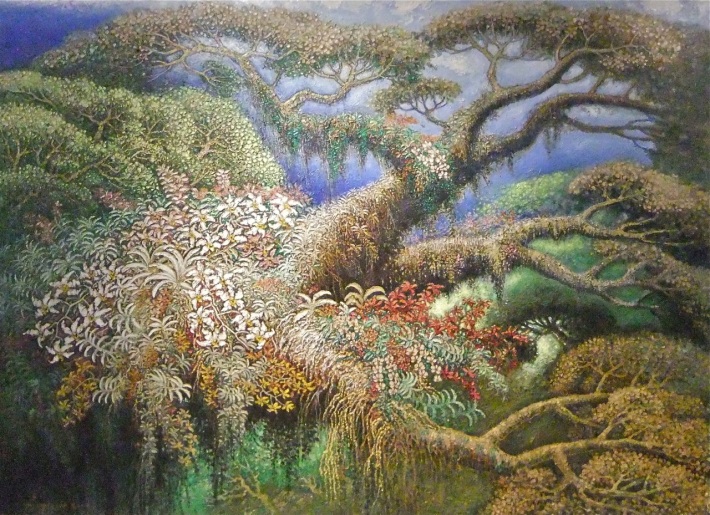 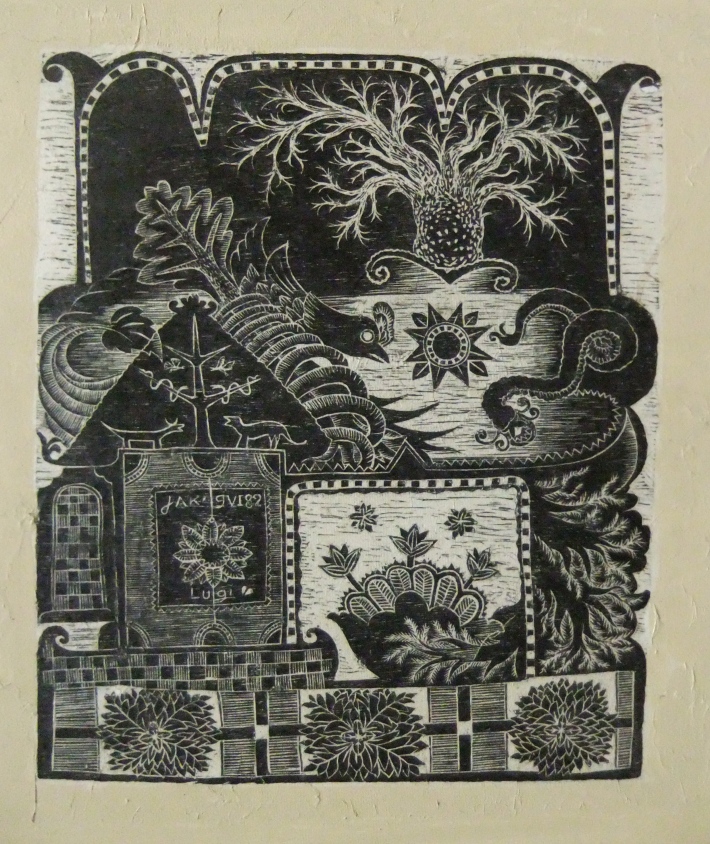