Drawing is the basic fundamental of Balinese traditional painting.

From the flat two-dimensional Classical Wayang works derived from the East Javanese Majapahit Hindu Empire (1300-1850), to Balinese modern traditional art – the three-dimensional narratives that evolved in the 1930’s and  became internationally renown. Pencil and ink drawings upon paper, cloth or canvas shape visual elements into readable images allowing communication between the artist and observer.

Not only essential in traditional art making, yet also in the process of translating esoteric knowledge into practical use, rerajahan are an example of how sacred drawings are perfectly woven into everyday Balinese life. Sketches depicting calendar symbols, alchemic practices, medicinal remedies, sacred buildings, gods and demons – rerajahan help in the completion of describing the universal Balinese Hindu philosophy and man’s relationship to it.

Of rerajahans many uses one is of protection, and in order to fulfill that function rerajahan are invested with energy and made on an auspicious day with specific offerings by a qualified practitioner. After the drawing process is finished they are endowed with magical power by the use of a sacred mantra.

Balinese sacred manuscripts, known as Lontar are also another cultural icon. Made from processed palm leaves, the lontars contain text and images and are inscribed with a special iron tool – pengerupak. The subjects that are dealt with in the lontar cover a variety of aspects of human life, such as history and genealogy, religion from the holy books, astrology and astronomy, homeopathy and healing, performing arts knowledge, epics and stories, and illustrations from the Wayang shadow puppet theater. 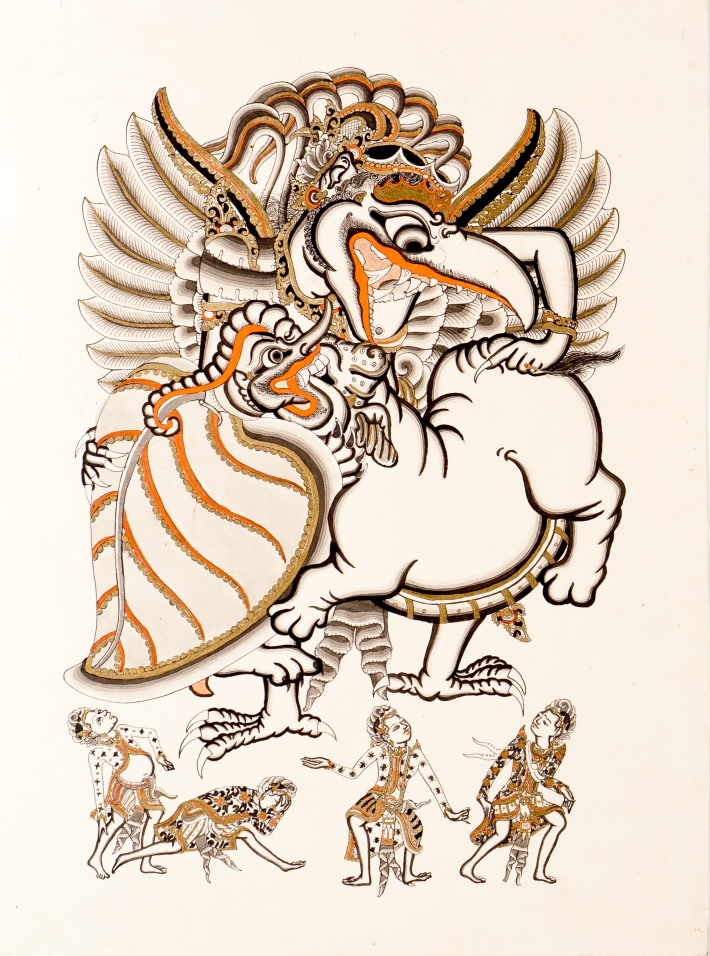 Gusti Nyoman Lempad (1862-1978) is considered the first modern Balinese artist. Prior to the 1920’s Lempad was a renowned traditional architect – udagi, he was a skilled draftsman prior to adapting his sketching to art. He was a master sculptor of temple statues, masks, a maker of wayang puppets, and an expert in the making of cremation towers, sarcophagi and nagas. Post 1920’s, during Balinese art’s most revolutionary period (1930-1945), Lempad began drawing and became famous for his line drawings that were a futuristic adaptation of figures from the Wayang Kulit and  local myths.

Not only was Lempad responsible for a new style of Balinese art aesthetics which featured elongated and distorted figures in the later past of his life, he adopted a sense of space into his compositions that was new and invigorating. He carefully utilized empty areas of white paper in his works that emphasized the brilliance of his figurative line drawings, while the balance of composition then became essential. It was Lempad’s natural imaginative and innovative ability in expressing old stories anew, along with the strength of his flowing, pure and defined lines that was fresh and new and revolutionized Balinese art.

Cartoons first began to appear in numbers in 1920’s in Bali’s literary publications. In recent decades they have played a pivotal role in shaping the Balinese people’s opinion and position on various developments on their island, as seen on mass in local newspapers and magazines. The cartoon has become an integral and prominent part of the visual language of contemporary Bali as a method of communicating about culture, as well as for social and political satire. Despite being an increasingly valuable mode of social commentary cartoons are yet to be fully appreciated by the Indonesian collectors of fine art.

Amongst an enormous pool of talent two cartoonists have forged names for themselves both locally and overseas, Jango Paramartha and Putu Ebo, via their Bog-Bog Magazine.  Popular with locals and foreigners, it features satirical takes on the Balinese culture and of course, humorous slants on tourists.

Wayan Sadha (1949-2014) is one Balinese cartoonist, however whose work has placed him in a class of his own. Made popular during the 1990’s with his stint in the Bali Post newspaper’s English Corner, followed by regular contributions to magazines Sadha’s narratives expose the plight of the poor in this increasingly marginalized society. A bedroom scene depicts an unsatisfied woman complaining to her lover about his lack of virility, while through a hole in the wall an onlooker sniggers and on the floor a dog chews on discarded underwear.   Sadha’s works accentuate the mundane while revealing the other side of Balinese kampung (village) life. They are rich in detail, often vulgar, yet always speak of the truth.

One of Indonesia’s finest realism painter’s Chusin Setiadikara (b. 1949 Bandung West Java) resides in Denpasar. His study of two children Boys, 2013 exhibited in May 2013 at the National Gallery of Jakarta is noteworthy for his use of the cross hatching sketching technique, a method rarely utilized by artists, to define his subjects.    Acute sensitivity and precision is revealed – the subtle lines in charcoal that build the subject’s form are patterned in beautiful symmetrical harmony.

Chusin, amongst others, honors the art of drawing and strives to explore its greater potential.