Pintor Sirait at his Denpasar Studio

Art is a compelling force that interacts with, and enhances our conscious and subconscious minds. Shamans, masters of primitive art created with intention works rich in symbolic meaning that communicated via the language of the soul.

Knowledge of symbols, and how the subconscious ‘reads’ and responds to art are potent facets of Indonesian artist Pintor Sirait’s creative oeuvre. So much so that his gift of translating inspiration into wonderful 3 dimensional forms has distinguished him as one Indonesia’s most important contemporary sculptors.

Born in Germany in 1962 to a German mother and to a father of Batak, Sumatran origin, aged five Sirait arrived in West Java, and grew up in Bandung. He completed high school and a few years of college before moving abroad, studying psychology, and then sculpture in the United States.  His curiosity for deciphering the human psyche has led him upon a quest that has positioned him securely within the international art world.

“I fell in love twice,” Sirait recalls. “First while living in the US I fell in love with the possibility of learning more about the world. I became obsessed with the library system, because in Indonesia we did not have one with such a wide range of reading material on art and culture. During my early twenties I did years of learning and absorbing. I had a fascination for Indonesian history; a hunger to know about my homeland.”

In 1984 Sirait moved to the US and between 1985-88 he studied a Bachelor’s degree in Liberal Arts in Nevada. He accessed books about Indonesia containing knowledge that could only be found abroad. Following this he pursued psychology. “I was in the midst of doing my graduate studies on clinical psychology. I was a very serious student so my professor suggested I take some art classes to enhance my creative thinking abilities. I immediately became emotionally, physically, and spiritually captivated with the sculpture.”

Sirait abandoned his psychology studies and went straight to art school. Within a few years he was working between Indonesia, France and the US exhibiting and selling his work.  His artistic channel opened up as if the universe conspired with him to create an exciting and empowering new world. “I fell in love with the possibility of making things derived from my self-education.”

“I learned to meld my ideas into sculptures from a psychological/holistic perspective.

I combine the knowledge of psychology into my art to help understand the psyche and how the emotions work. Incorporating the psychological dimensions of how we sense, think and feel; how we engage with art.”

In recent years Sirait has been more focussed on any possibility to create public art. “Public art interacts with people allowing them to both see and feel.” 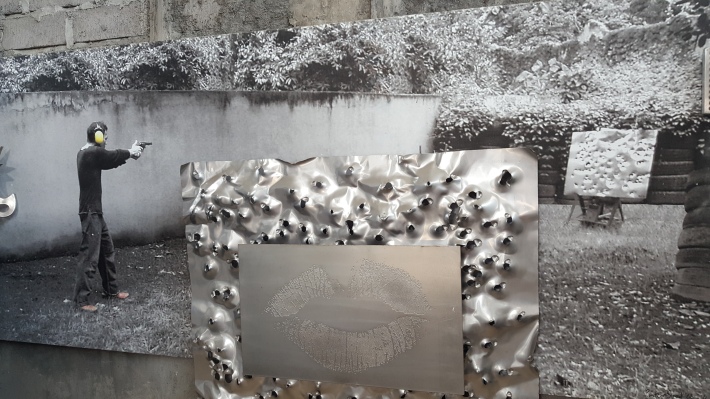 The along awaited new development of the International Terminal 3 at Jakarta’s Soekarno – Hatta airport is currently entering the final stages of construction. Included within the terminal’s modern architectural design features PT. Angkasa Pura II, the airport’s management authority, will make a bold and exciting statement via Indonesian contemporary art.

In his search to find classical Indonesian beauty, translate and present it into a public artwork to enrich the modern architecture of Terminal 3, the beauty of the Balinese traditional dance “Rejang Dewa” communicated intimately to Sirait. Utilizing Japanese calligraphy he then responded with ink on paper.

“I translated the brush strokes into three different 3 dimensional shapes which became Flow – a stainless steel 1900 x 800 x 700 cm form that floats and sways, then cascades down over two levels of the airport terminal’s arrival hall. I wish Flow to remind Indonesians of how fortunate we are to have so many beautiful cultural inheritances to be proud of.”

Venturing inside Sirait’s studio in South Denpasar one enters a large industrial workshop, it’s  nerve center a cozy air-conditioned office.  His fifteen staff he brought from Bandung, trained, and that have worked with him for 20 years hover around steel modules of ‘Flow’, meticulously engaged in aligning, and welding.

The environment is noisy, dirty, almost confronting. The tropical heat is extreme. Yet all the while there is an exciting interrelationship of dynamics at play. Patience and skill combine with intuition as man and machine melt and fuse components together. The sight of red-hot liquid metal is enthralling, sexy too!  It gives a sense of creativity in the translating of industrial materials into something that relates to human feeling. Alchemy is a vital essence of this process.

Some of the award-winning artist’s themes explore his Batak heritage, Indonesian culture and beauty, along with the paradoxes of the modern world, such as violence and obsession. 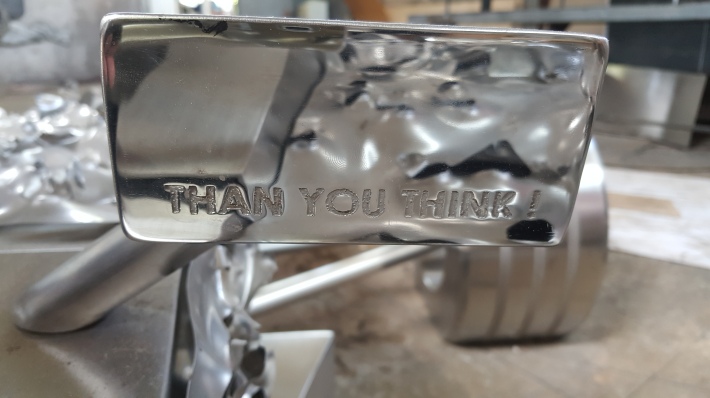 Detail of Democracy Kills (History is Closer ….Than You Think!)

“I grew up in Indonesia learning to work within its cultural boundaries. Through art you can open things up and talk about subjects artistically, yet with sensitivity and politeness. Art does not have to offend; sometimes it needs to though. Yet only in the right context – through the most creative, non-threatening and non-judgemental art.  I learned this from psychology.”

Dividing his time between his workshop and his home beside the ocean at Canggu, each morning Sirait rises early walks the beach, and then returns home for his ritual meditation. His second storey home studio allows him to gaze tranquilly westward, out across the sea.

His words of advice to aspiring young artists: “Its good to look around you, yet what’s most important is to look inside.” 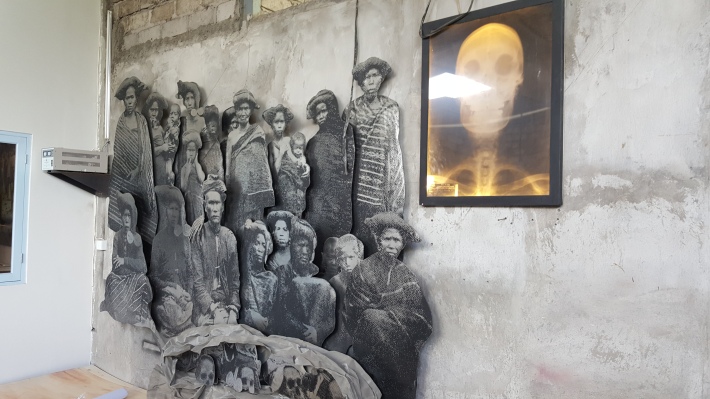 Sirait’s works can be found in the US, Europe, China, Southeast Asia, Australia and throughout Indonesia, while he has extensively exhibited for the past twenty years. A ‘product’ of three continents, he believes it is important to live within and outside of a culture in order to think freely as an artist.

“What one can find within oneself is fantastic.  What may be expressed through art can be felt more by other people because it has authentic elements derived from inner experience. What I am interested in as an artist is how I may touch people’s hearts through my work.”