During the past few years an unusual eyesore has slowly grown upon Bali’s Pecatu Bukit peninsula landscape, a massive concrete and steel foundation that now projects up over 80 meters into the sky.

Straddled by an enormous crane, the unlikely structure will be the pedestal for an icon of unprecedented proportions, that according to its creator, Balinese sculptor Nyoman Nuarta, represents the cultural identity and character of the Balinese and Indonesian people, while embodying Indonesia’s longing to contribute something of significance to the global community.

Yet this landmark project by the award-winning sculptor, responsible for numerous monumental public artworks throughout Indonesia and abroad, including the “Arjuna Wijaya” statue in Jakarta’s main avenue, has evolved beyond any expectations to be the most challenging of his illustrious career.

“Along with big dreams, will come big challenges,” Nuarta said, about upon his visionary artistic project; the GWK Cultural Park, and the trials he has encountered during the process of realisation over the last 25 years. “Despite the years of delays this project has taught me to be patient and to never give up on my dreams.”

“The GWK idea first came to mind in the late 1980’s,” recalls Nuarta, who was born in Tabanan in 1951 and left Bali upon graduating from high school for West Java to study sculpture at Bandung’s ITB. “Its development has had to sustain the paralyzing effects of a political regime change, a nationwide financial crisis, conflicts within the project’s management structures, and more.”

“Cultural heritage alone will not sustain the Bali tourism industry. We need a place where our heritage can be both protected and also be developed,” said Nuarta, aware of the distinctive creative potential of Bali and the future possibilities of contributing something completely different to the sphere of global art. 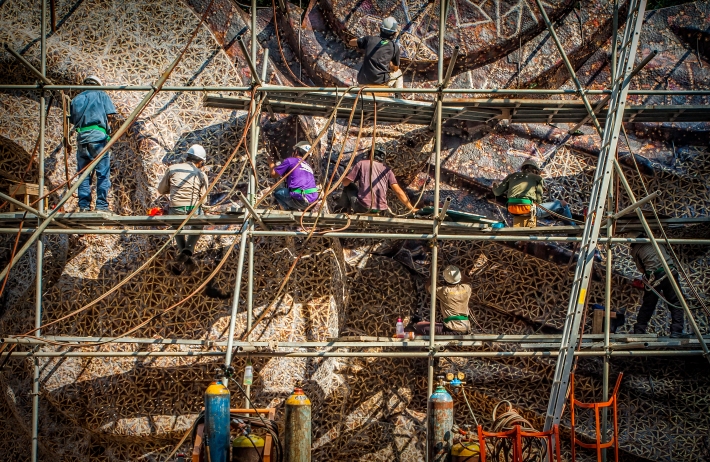 Nuarta’s Team at work in Bandung

“Bali is always welcoming to new cultures and artistic expressions from around the world. I envision GWK Cultural Park to be a place where Balinese thinkers and artists could showcase their works and have creative dialogue with their counterparts from across the globe.”

“The concept also includes the GWK World Cultural Forum, with its goal to introduce different cultures of the world through our mission to educate people to become more understanding towards other cultures,” Nuarta said. “In the end our objective is world peace.”

Set upon a 60-hectare limestone escarpment the GWK Cultural Park, owned by the public company PT. Alam Sutra with an 18% shared controlled by the PT. Bali Tourism Development corporation, first began construction in 1996. It’s concept was devised by the GWK Foundation that was headed by two ministers of the then Suharto government, Nuarta and a few individuals and businessmen close to President Suharto. Nuarta was then commissioned by Suharto to build a giant statue at GWK of the Hindu God Wisnu perched upon the back of his sacred cosmic vehicle, the mythical Garuda bird.

The 75-meter-high Garuda Wisnu statue, with a wingspan of 64 meters is made of copper and brass sheeting, stainless steel framework and skeleton, and is being constructed by PT Siluet Nyoman Nuarta, with its 200 personnel from various academic and cultural backgrounds, in Nuarta’s Bandung workshop. The sculptures outer skins, measuring 22,000 square meters, and the stainless steel framework are to be cut into 700 components and then transported overland by 400 individual truck journeys to Bali.

On location the statue will be forged together then mounted on the pedestal, the total height of the finished monument will be 126 meters, 30 meters taller than America’s Statue of Liberty, while its volume will be 11 times greater.

“I use the image of Garuda and Wisnu as a symbol of courage and loyalty. Wisnu is responsible for cosmic balance and harmony of all life.” The statue, Nuarta said, “Symbolizes a universal calling to all global citizens to play their part in nurturing and protecting the Earth.”

The Ground Breaking Ceremony at GWK Cultural Park, Initiating the Start of Construction

Nuarta’s prominence as a sculptor began shortly before graduating from ITB, after winning the Indonesia’s Proclamator’s Monument competition in 1979. He was then appointed by the committee to build a statue of the nation’s founding father Soekarno. In 1977 he had joined  the revolutionary “Gerakan Seni Rupa Baru Indonesia” (the Indonesian New Art Movement) regularly participating in their collective’s exhibitions.

Having grown up close to nature Nuarta learned the importance of guarding the harmonious relationship between man and the creator, humanity with nature, and the relationships among mankind themselves. His artworks often reflect this important Balinese Hindu philosophy of Tri Hita Karana.

After a 16 year delay in August 2013 another chapter in the GWK statue’s construction began, then early in 2015 the pedestal’s erection ground to a halt. This year, however it has witnessed steady development, with the statue expected to be completed by 2018. When completed GWK Cultural Park will include a museum built within the pedestal, a cultural park and integrated tourism facilities. 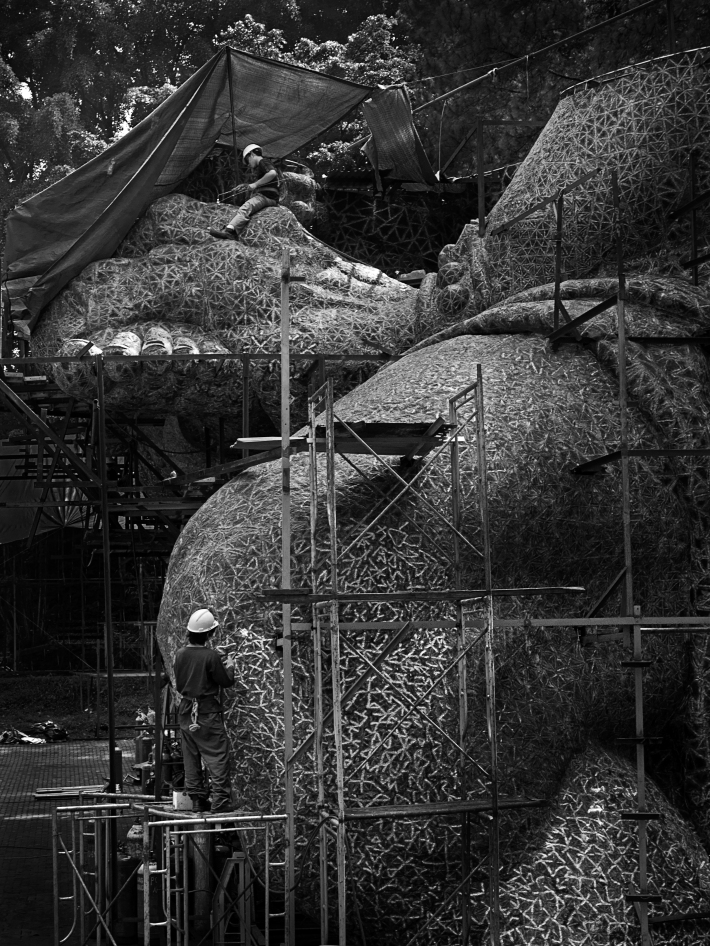