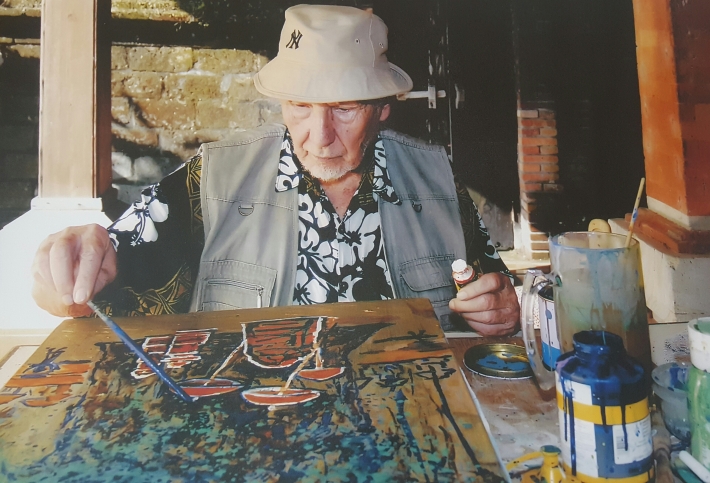 The Death of Dutch Colorist Arie Smit 23 March 2016 is an Enormous Loss to The Canon of Southeast Asian Art.

During an August seminar at Ubud’s Neka Art Museum, a gathering of over 100 members of the Balinese art community paid homage to the legacy of the Dutch post-modern colourist Arie Smit (1916-2016). The iconic painter, who left a distinguished mark in the history of art in the region, passed away 23 March, only days short of his 100th birthday.

Renowned for his vibrant landscape paintings and scenes of Balinese village life Smit is a much-loved artist; his work forms part of collections in Indonesia, and throughout the world. Characterised by rapid movements with dense mosaics of color, allowing only scenic images to emerge in abstract forms, Smit’s compositions resemble an impressionist-pointillist style, and have been dubbed “Poems of Color.”

Drafted into the Netherlands army, sent abroad and stationed with the topographical service in Batavia, now Jakarta, Smit first set foot in the Dutch East Indies in 1938. Previously he studied art at the Academy of Arts in Amsterdam. In 1942 with the out break of World War II he was imprisoned by the invading Japanese army, later being shipped to Singapore, Thailand, and then Burma to undertake forced labour.

In 1950 Smit returned when the Dutch acknowledged Indonesia’s sovereignty after the revolution of Independence (1945-1949), becoming an Indonesian citizen. He settled in Ubud in 1956. Enchanted by the tropical light and landscape he roamed throughout Bali, reputedly moving house 36 times. Smit became the most important stimulator of painting on Bali, post Second World War.

“The Balinese trust more in their feelings than which meets the eye,” said seminar speaker Suteja Neka, founder of the Neka Art museum, long time friend, and Smit’s art dealer. “Smit’s unique skill was in capturing the potent invisible elements of Bali in his dazzling colourful verve.”

“In 1960 Smit began sharing art materials with, and teaching young boys in the village of Penestanan, near Ubud. This was the beginning of the “Young Artists Style”. At its height there was more than 300 practitioners,” said international artist and ISI lecturer Wayan Karja, who was born in Penestanan in 1965. “He helped transform the village, and prosper economically; poor farmers turned into painters. Not only was he an art teacher, Smit was a father figure to the village as well.”

The “Young Artists Style” was fresh and exciting; 60’s Balinese psychedelic pop art that emphasized color, the denseness of pure decoration, with a strong graphic sense. Smit did not attempt to influence the style of boys work, only the subject matter of village life. At his home studio he was careful to keep his paintings out of sight so they were never copied.

During the tourism boom of the 1970’s the genre became enormously popular.

Smit’s work comes in a wide range of formats, from small postcard sizes to works of 1.5 meters or larger. After the 2008-2010 Indonesian contemporary art boom that witnessed over inflated prices for up and coming artists, collectors shifted their focus to Indonesian modern art. Paintings by the old masters became popular, some of which were considered as undervalued.

In 2011 the market realized a record price for the most expensive work sold at auction by Smit at the March Larasati Singapore sale. “Balinese Village and Farmlands” sold for close to 5 times its estimated price at a high of US $ 124,000. At Christie’s Hong Kong Asian 20th Century Art Sale May 2015 Smit’s “Pura” sold for just over US $ 207,000.

Nowadays many of Smit’s works sell for modest prices within their estimates and under US $4,000. The Smit connoisseurs however, are very specific about their choices with some willing to compete bidding the prices up, determined to secure their desired trophy works.

During Sotheby’s Hong Kong Autumn Sales 2016 in the Modern and Contemporary Southeast Asian Art Day Sale 3 October thirteen paintings by Smit, ranging through the decades from the 1970’s – 1990’s, go under the hammer. They are sure to attract much attention from regional and international art collectors.

Believing that a painter’s style was, in short, his personality, Smit’s oeuvre reinforced his claim, reflecting traceable changes and developments over time. His aesthetics created a greater position for Bali within the context of Indonesian art.

Arie Smit spent his final days lying peacefully in bed at home in Ubud, despite his failing eyesight his mind remained clear. Famed for his “broken colors” style, his passing is a monumental loss to the canon of Southeast Asian art. 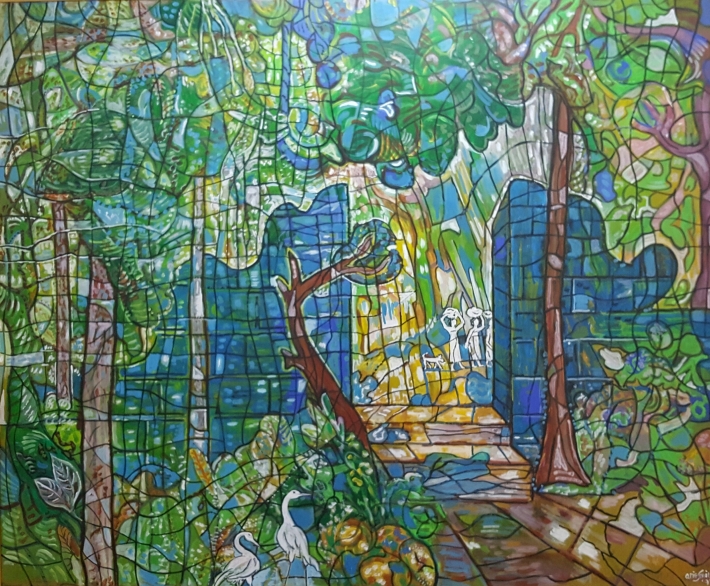 The paintings pictured above are just a small part of the Arie Smit collection at the Neka Art Museum on Jalan Raya Sanggingan, Ubud.