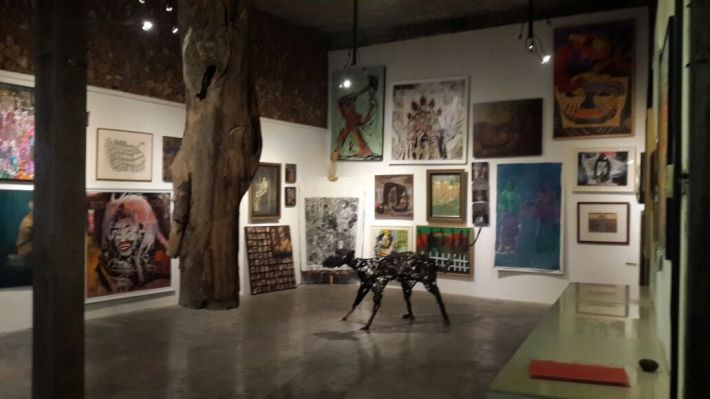 Bloo Art Space, located at the Bloo Lagoon Bali Villas and Resort for Sustainable Tourism in Padang Bai, Karangasem, has become THE center for art in East Bali. Based on an eco artists village concept, the resort is the brainchild of architect owners Tony G. William and his wife Marita, and its gallery has been presenting regular programs of events over the past four years. This year, however the gallery has become known as Bloo Art Space, under management by Ratna Odata and Kenyut of Cata Odata in Ubud (who have steering the venues artistic vision for the past three years).

WOI – Wall of Indonesia, a Progressive Art Exhibition 7 May until 14 July culminating with an Artist’s Conversation brings together the work of 18 Indonesian artists, communicating about identity and what it means to be an Indonesian artist, is the current Bloo Art Space event. 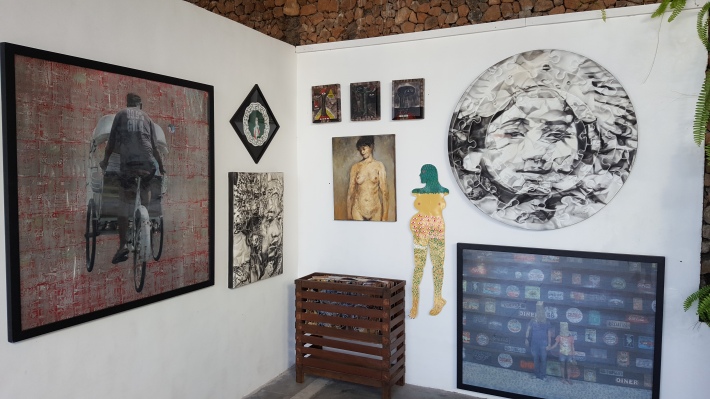 “Is it appropriate for an artist to bear a geographical title where the socio eco political climates must put into context in order to appreciate the work of art? This question becomes more perplexing by the fact that the Indonesian visual arts were built on the basis of western theory being taught in every formal art institution in Indonesia.”

““The Living Wall” within the Bloo Art Space will gradually be filled with artworks by the WOI artists during the duration of the exhibition. Dubbed ‘living’, the WOI shows the steps taken within the 2 month journey starting from the artists’ studio all the way to exhibiting at Bloo Art Space,” said Ratna Odata. 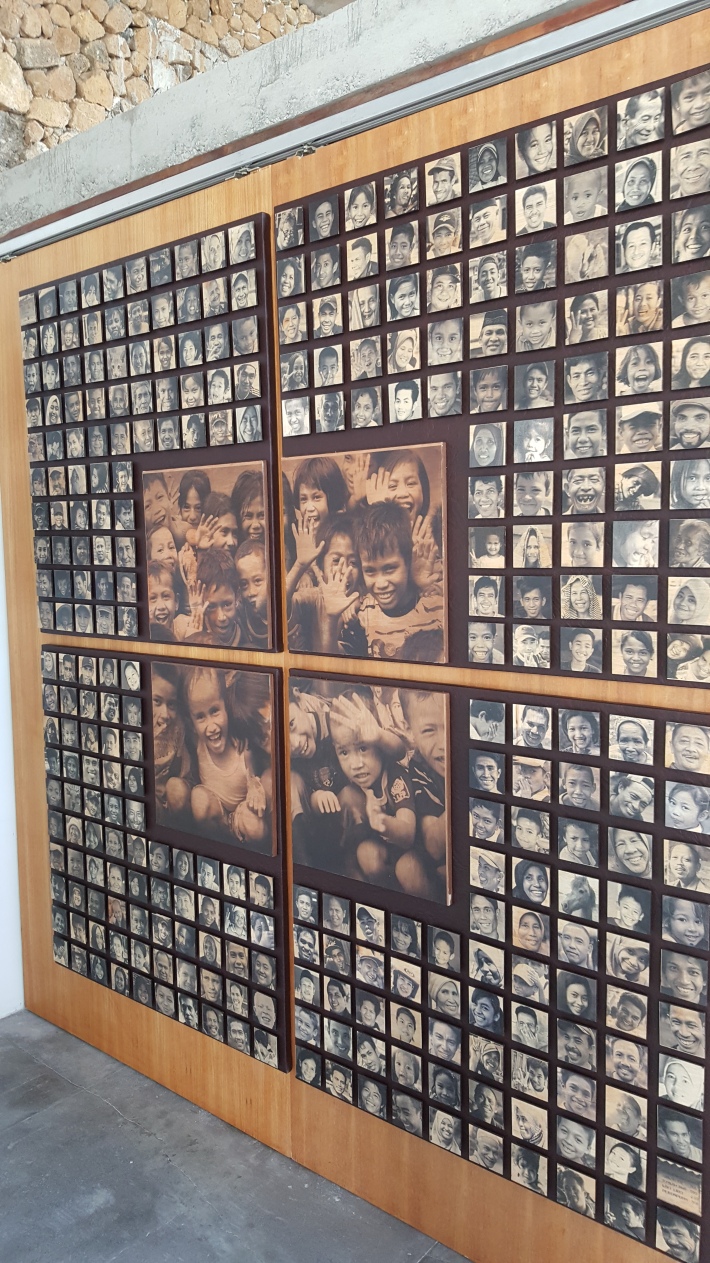 Beginning with the 1st wave on 7 May when the WOI opened, empty walls were the feature of the Bloo Art Space. Endeavoring to encourage casual and spontaneous dialog between the artists and audiences, the audience were invited to be participants with the artists Wai Santy, Gede Sayur, Agustian, Budi Agung Kuswara and Nyoman Suyadnya in the process of displaying the works on the walls under the guidance of the Cata Odata curatorial team which included writer Dwi Wibowo.

The artworks from each artist were not be placed together, instead were spread throughout the gallery adopting the visual style of a salon art display were works cover the entire wall space from floor to ceiling. During the proceedings of the event other 3 dimensional art works are placed on the floor allowing WOI to take on a larger art perspective.

“During this unique process we are inviting the artists to synergize and work together as a community, suspending their egos of seniority and juniority,” said Ratna. “The placement of the art works is not based on, or neither reflects the artist’s career achievements.” 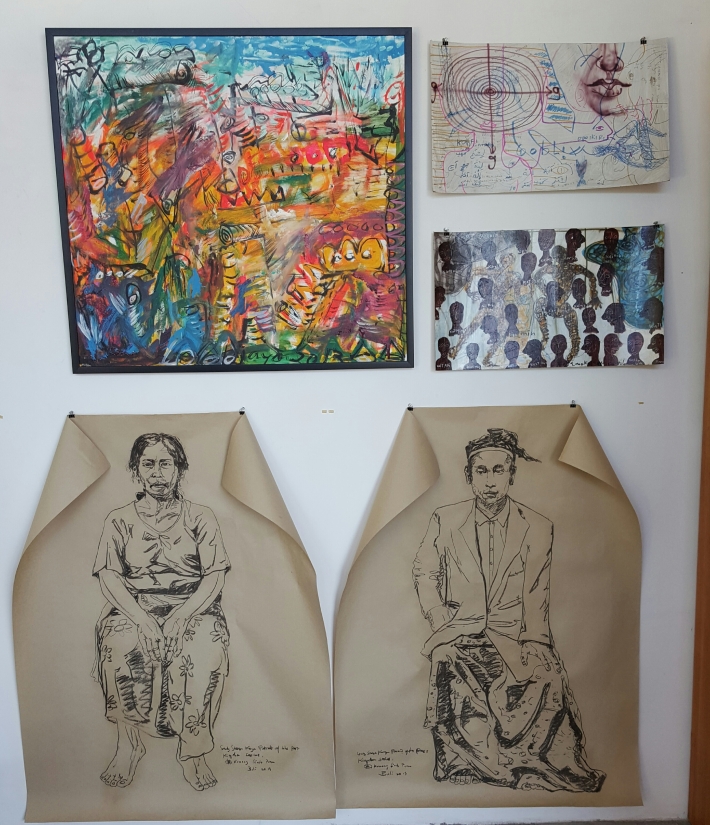 As a part of the process from the artist’s studio to the Bloo Art Space each of the artists is filmed and a one-minute video clip posted on Facebook granting interesting insights into the artists creative process, and their identity as an Indonesian artist.

“Art is abstract, universal, and liberal. When an artwork speaks for its author we will realize that the taste and experience portrayed in it is relative,” says DP Arsa. “Because all these are liberated by the artist the idea of beauty becomes something that is subjective.” One of Bali’s leading contemporary art photographers and based in Denpasar, Arsa presents his art 3 works which are a fusion of images processed on Photoshop.

Another photographer, Dibal Ranuh, on the other hand, presents a display of black and white digital images, a photo essay investigating identity featuring the smiling faces of over 300 people (and one horse and goat) that he met during his recent visit to the East Indonesian island of Tambora. 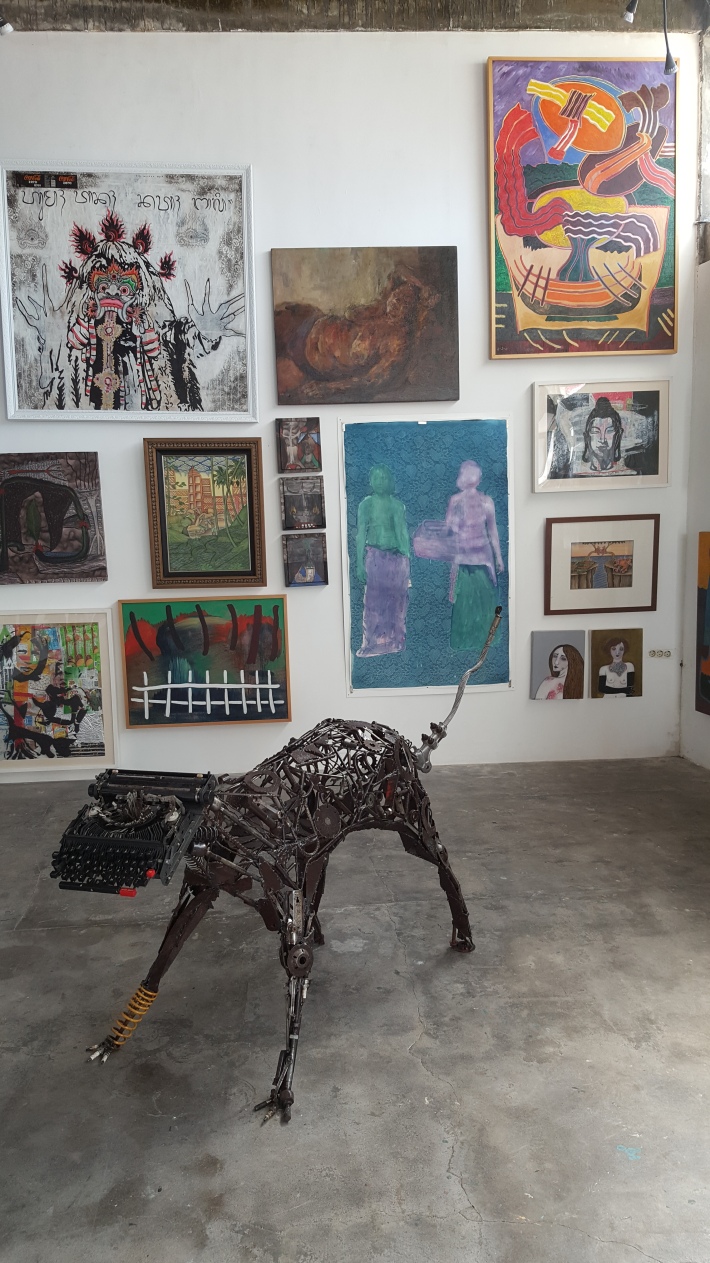 Colorful, mixed media three-dimensional wall hangings in the form of masks are by Balinese artist Rio Saren. Citra Sasmita’s presents both paintings and one figurative aluminum cut out form in her characteristic styles that ‘talks” of the plight of women in Bali. Batuan traditional artist Made Griyawan exhibits some of the exciting new wave of traditional art that is evolving in Bali.

Three cut out wood prints on cloth displayed on bamboo frames to represent figurative forms are the contribution by female artists Ni Luh Pangestu from Denpasar, who is currently studying at the Indonesian Art Institute (ISI) Yogyakarta. Three dimensional metal sculptures by Agustian taking the form of four legged animals made from scrap metal, car parts, tools, bolts, spark plugs, springs and pedals, featuring heads made from type writer keyboards are a special feature of WOI and both artists works add an extra, interesting dimension to the exhibition.

Made Bayak presents works in a new series of creations under his multi dimensional theme “Plasticology” whereby his works are made from plastic trash that are layered then painted over with stencils and acrylic paints. “Plasticolgy” also includes workshops focusing on the environmental issue of discarded trash in Bali which he presents to schoolchildren throughout the island, along with other groups. also involving area trash clean ups, then making art works from trash.

Koman Sindu Putra presents two large figurative sketches in charcoal on paper that are spontaneous studies of people dressed in traditional attire and reveal his strong sketching skills. He also exhibits two works in his trademark style in which he builds the surface of the canvas with the embossing technique and recreates portraiture images of Bali’s past eras. Wai Santy, a female artist from Denpasar who has been studying European techniques of figurative and portraiture oil painting presents three compositions that feature her painterly style and add an important emphasis to painting based on strong, skilled techniques. 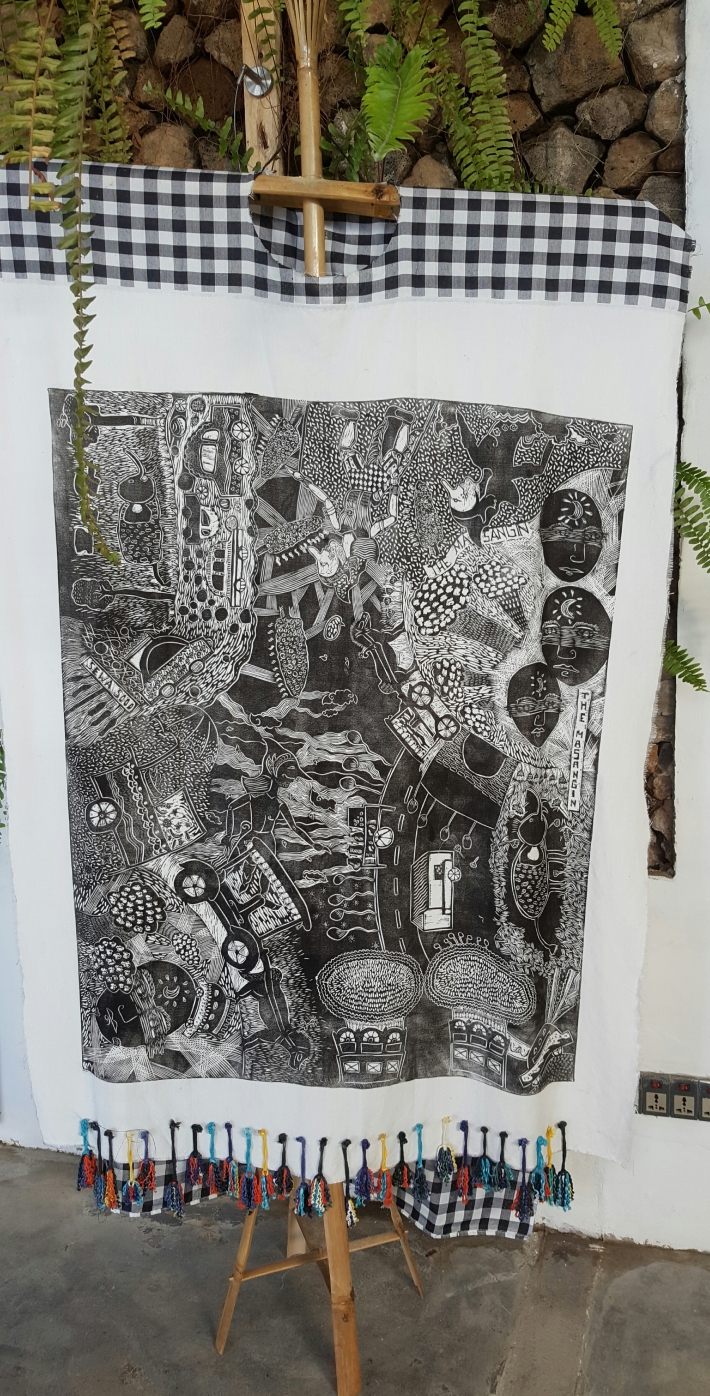 Cut Out Wood Print on Cloth by Ni Luh PAngestu

The artist’s conversation on the afternoon of 2 July featured the 18 WOI participating artists, the theme concerning the identity of Indonesian artists was explored, the goal being to enrich the dialog about art in Indonesian so that it can contribute to the search of the Indonesian visual art identity.

“Advances in modern technological have enabled us to see, hear, do and learn more than our predecessors. These shifts have led us to become globalized where we share something in common with the rest of the world, be it economically and culturally,” said Ratna Odata, summing up one agreed outcome of the artist’s discussion.

“This was the first time all 18 artists met each other and shared their perspective of Indonesia and their artistic journey. Even though 2 months is too short to answer all the questions we’ve raised about Indonesia, we should see the conversation as part of the research that can be used to determine our next step.”

“Globalization is not an excuse to forget and abandon what we already have and learned in almost 71 years that unity has been achieved in diversity. We believe that being local is already being global, that differences should not be seen as a menace, but as a blessing.” 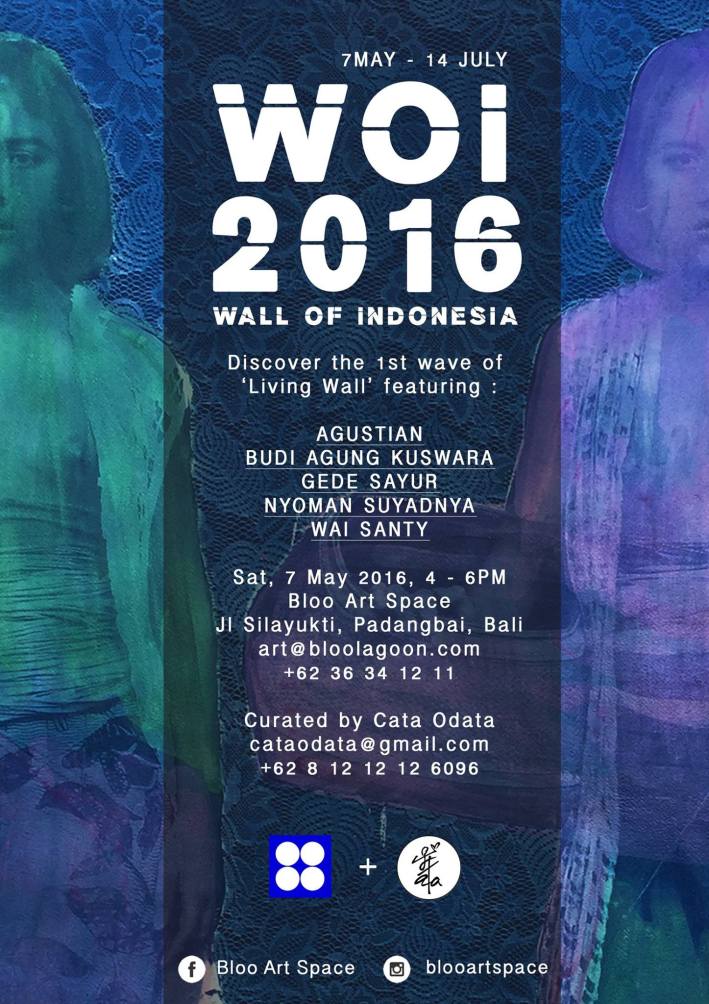 and Resort for Sustainable Tourism