Boedi Widjaja is an artist with one foot positioned in two similar, yet disparate worlds. Born in 1975 and raised by Chinese Indonesian parents in Surakarta, Central Java,  from the age of nine he has lived in Singapore. Since 2012 he has practised full-time as a multi-disciplinary contemporary artist. Widjaja’s art intersects graphic design, architectural and fine art principles while including performance and explorations and interactions with alternative cultures.

Black—Hut, Black—Hut, Widjaja’s ideas about home and the complexities of belonging in a transient world initially came to life through a distinct dream about five years ago. In his vision, he saw one of the pioneers of modern architecture Charles-Édouard Jeanneret  (1887-19650), also know as Le Corbusier, exploring and contemplating his ideas about building, dwellings and being.

Widjaja’s architectural-sound proto-structure has evolved through three individual installations. Black—Hut was first commissioned and presented at the Institute of Contemporary Arts Singapore in 2016, as a Singapore Biennale Affiliate Project. The second and third installations – both titled Black—Hut, Black—Hut – were co-commissioned by the Queensland Art Gallery & Gallery of Modern Art (QAGOMA) and the Singapore Art Museum. Conceived as a diptych of site-specific proto-structures across space and time, the second installation of the Black—Hut series was presented at the 9th Asia Pacific Triennial of Contemporary Art in 2018 and the third, in the 6th Singapore Biennale in 2019. 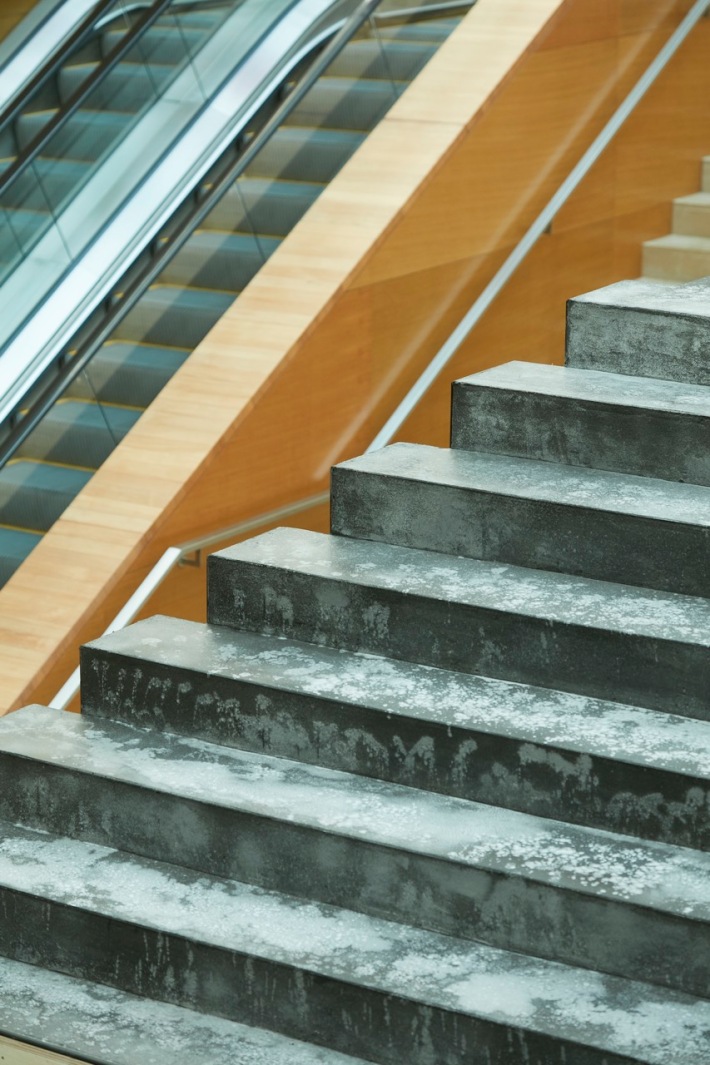 Black—Hut, Black—Hut is on display at the National Gallery of Singapore (NGS) from 22 November 2019 through 22 March 2020. Entitled Every Step in the Right Direction, the Singapore Biennale 2019 presents 150 works by 77 artists and art collectives from 36 countries and territories displayed at the National Gallery Singapore (NGS), Gillman Barracks, Lasalle College of the Arts and other various historic locations and public spaces. Helmed by artistic director Patrick Flores, the biennale seeks to address questions and ideas of how humanity can approach the past, present and future, looking to create a pathway to brighter and more harmonic times ahead.

Memories and impressions of the Surakarta Royal Palace located close to his childhood home and the sounds of the traditional Javanese gamelan floating gracefully upon the late afternoon breeze are encoded upon Widjaja’s psyche. They ignite a wonderful sense of nostalgia that has helped inspired his installation. “Three years ago I discovered an online library of recordings of a 100-year old gamelan – Gamelan Kjai Paridjata – that was acquired from the Surakarta Palace,” explained the artist who to avoid the racial tensions under President Suharto’s New Order regime (1965-1998) his parents sent him to Singapore, where he has since resided apart from his family.

”I then rearranged the 131 recordings within a matrix and displaced and inverted each sound out of its original position to generate the sequential pulse-like sounds ‘Datum’ (the musical piece in the installation),” he said. “The sounds are alien yet somehow feel at home. Perhaps I’ve grown to be familiar with there distorted, displaced qualities.”

Black—Hut, Black—Hut is positioned on a flight of stairs leading from the ground floor down to the basement in NGS’ Coleman courtyard. It exists in the space between the two physical levels of the historic building reflecting the deep-seated and ongoing theme at the core of Widjaja’s artworks – of the diaspora, isolation, of the complexities of hybridity and the bridging of multiple cultures, along with his relationship with the physical surrounds where he intuitively feels grounded and at home.

Widjaja coordinates the linear planes of the steps into the vertical cladding of the structure, a continuation of the horizontal line aspect so that it appears grounded into the gallery as one harmonic and unified form. The striking exterior cocoons an inner sanctum, the imagined centre of Black—Hut, Black—Hut. From this unusual space ‘Datum’ radiates a distinct, yet strangely assuring atmospheric sound.

A salt-infused black concrete membrane upon the surface of the steps and the roof of the structure introduces an ecosystem to the installation.  This encourages efflorescence crystallisation blooms as the material ‘sweats’ in the tropical climate of Singapore. “When I started to think about concrete, the material triggered memories of my transition from Surakarta to Singapore. From a less urbanised environment to a very urbanised city in SE Asia,” said Widjaja who in 2000 received his Bachelor of Architecture from the University of New South Wales in Sydney, Australia, while as young adulthood he explored his creativity via graphic design. 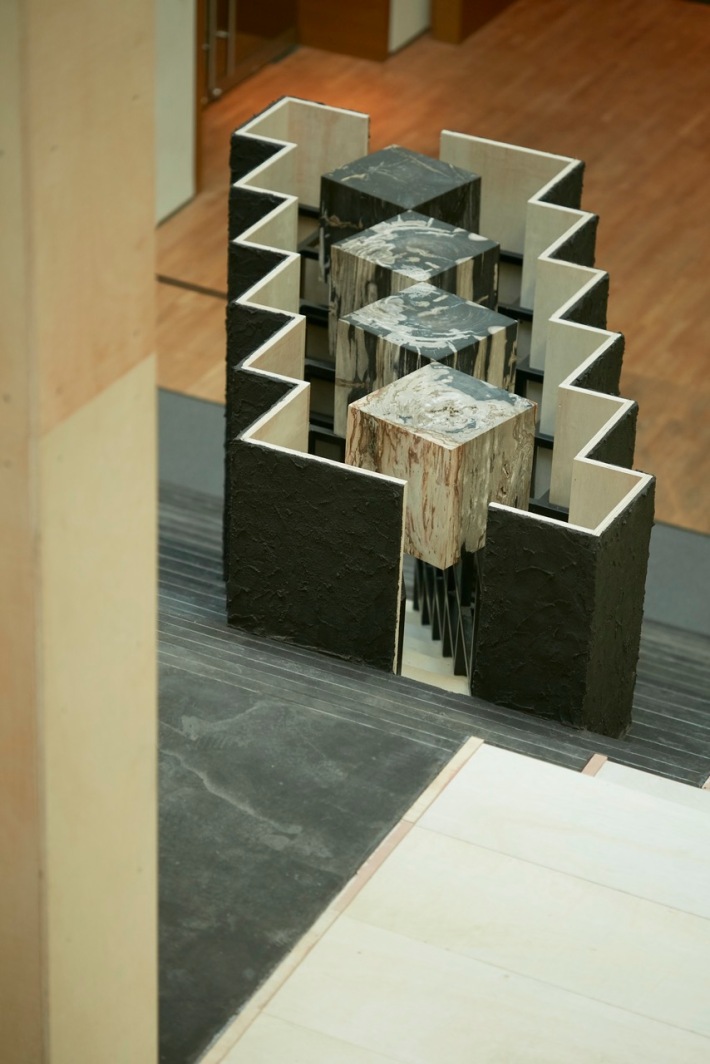 “When I first came to Singapore in 1984, the constructed landscape was very different from that in Surakarta. I was in awe of the row upon row of public flats, large-scale mass housing structures, with ordered recto linear geometry and the repetition of elements that were very different, all built in concrete. This visual memory has seeped into my design ideas.”

“In responding to the NGS site, a transitory space used for human movement, I was drawn to the basement as it is a new addition to the historic building. When we think about what transpires below the ground, the context becomes interesting with the NGS role in the historization of SE Asian art. So much of the history that goes beyond the 200 years of Raffles belongs underground within an archeological state,” adds Widjaja who in his relatively short career has exhibited in some highly prestigious events representing Singapore in the Live Art program of the Diaspora Pavilion at the 57th Venice Biennale (2017); Jerusalem Biennale (2017); ‘From East to the Barbican’ at Barbican (London, 2015) and ‘Bains Numériques #7’ at Enghien-les-Bains (France, 2012).

“In Singapore, we look to the underground as a means to project into the future by building structures. There is an exciting anachronistic quality where the future and the past intersect. This expresses a sense of time which I associate to my migrant experience – in being in an in-between space-time.”

“What I try to do is collapse several architectural traditions into Black—Hut, Black—Hut, includingJavanese architecture and the mandala – I am drawn to the latter because of its presence within traditions, and how it expresses cosmological and political ideas in one space. The mandala is present in both the installation and the Surakarta Royal Palace,” and he adds, “When I think about the centre of the Black—Hut, I think firstly of a sense of an anchor that is not present, yet which I yearn for. While the mandala-center is a concentration of cultural, historical and political power, it also points to the memory of my first home being located near to the Keraton – the universal centre according to local Javanese beliefs.”

“The spatial geometry of Singapore’s social housing seems to be conditioned upon a fragmented, staccato time that is regularly marked by interruptions. In the city, smooth and endless concrete surfaces become sound-tracked with the splintering of time,” stated Widjaja who’s solo exhibitions include, Black—Hut, a Singapore Biennale 2016 Affiliate Project at Institute of Contemporary Arts Singapore (2016), Path. 6 Unpacking my Library at Esplanade (Singapore 2014), and in 2019 Boedi Widjaja: Declaration Of, at Helwaser Gallery, his first exhibition in New York City.

To audiences exploring Widjaja’s work for the first time Black—Hut, Black—Hut, may seem indeed as an alien structure. So much so that they may be more comfortable to look, observe and enjoy it from various positions on the stairs, escalators and upper floors of the NGS, without the need for closer inspection.  To fully appreciate it however, one would benefit from observing and understanding his previous installation at APT in 2018 and recognise the two installations as a diptych. 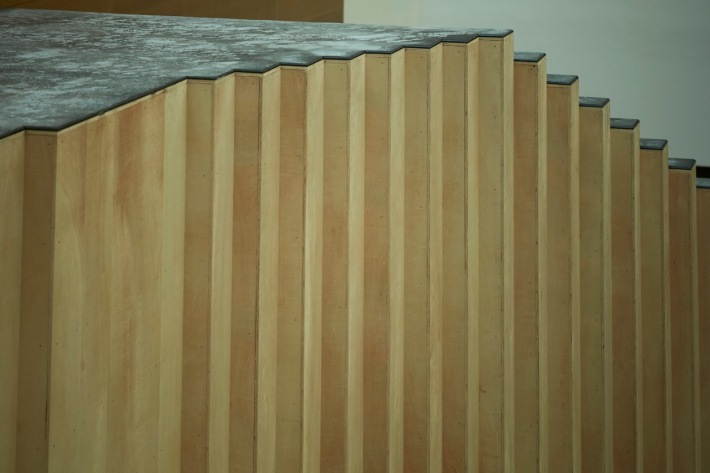 Black—Hut, Black—Hut is configured, says Widjaja, “to reference the gap between ground and land in the tropical and subtropical vernacular houses built on raised floors, such as the Javanese Joglo, the Queenslander, and the Malay houses. Ground is shorthand for me to speak about grounding, belonging, rootedness.” His APT installation in the Queensland Art Gallery referenced the ground level and a gap between an elevated structure, this installation is, however, a subterranean mirror of that work.

To assist curious observers gain a greater understanding of this NGS installation, they would benefit from video and audio explanations to gain insights into Widjaja’s ideas. For the inquiring minds, there is undoubtedly much to engage in, especially if they have the opportunity to meet and probe Widjaja or the biennale curators at the NGS.

For me, the work is visually and conceptually fascinating, especially as I have my interest in architecture and how structures and dwellings influence the human experience. On another level, this work entertains my ideas about my spiritual essence in relation to our physical world, and my fragmented feelings about belonging.

Both beautiful and powerful, yet unusual in its physical and sonic presence, Black—Hut, Black—Hut is an intricate work charged with layers of meaning and focal points to experience its varying degrees of subtleties of intimacy and monumentality. The visual rhythms of the structure are exhilarating, and fascinating in their linear character from the inner repetitive mandala aspect to the external design.

While it’s inside installation’s ‘nerve centre’ we may fully appreciate the audio rhythms and their fragmented otherworldly heartbeat. Between the silence the sounds are indeed alien, yet at the same time from a comforting organic source. Widjaja’s abstraction of dwellings that have informed his life stand as a moment where the contemporary emerges providing a thought-provoking space for people to meet and converse.

Widjaja’s Black—Hut, Black—Hut captures an intimate essence of the modern human experience. Of a duality that touches on the present, future and past – and of a species disconnected and out of harmony with the tempo of universe and nature – lost and yearning for belonging, somewhere within time and space. 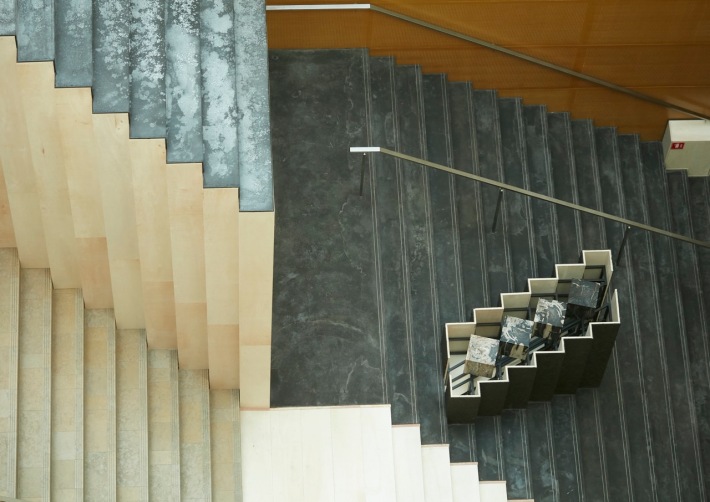