Volumes have been written about the foreign artists who have visited, lived and worked on the island of Bali during the first half of the 20th century. Walter Spies, Rudolf Bonnet and Theo Meier are celebrated icons, while Hofker, Covarrubias and La Mayeur are all praised for their special talents. These artists, however, are all male.

French female artist Genevieve Couteau first visited Bali in 1968 and was immediately fascinated by the island’s lush tropical environment and the rich culture, and immediately set forth exploring and reinterpreting the beauty she perceived. Returning briefly four years later, and again in 1975 when she resided in Ubud for 6 months, she made several other sojourns up until 1984. Even though Couteau’s creativity was phenomenal and she was the only European female artist to visit Bali, she is one important person the art historians have failed to cite.

Art inspired by post-war Universalism represents the period 1945 -1970. Its ideology is underpinned by a rejection of reality and nationalism – the type of patriotism that prevailed in Europe, the UK and America during the 1930s – 1940s. It emphasized a greater worldview with a focus upon understanding people from other cultures. Asians were seen as offering other, mysterious access to the spiritual realms. It was not the “exotic difference” that mattered – it was the exploring of different types of universal endeavour. The art genre idealized “the other”, while surpassing the prejudices.

Born in Paris in 1924 Couteau was a star graduate from Beaux Arts, the Art College of Nantes-Métropole with a national and international reputation. Her outstanding talent was quickly recognized by the art establishment when she won the Prix Lafont Noir et Blanc (Lafont Black and White Award) in 1952 with her captivating drawings in the surrealism style. She became a noted figure of the Paris art scene aged in her mid thirties.

It was in the Southeast Asia, however, where Couteau’s creativity ultimately bloomed. Her opportunity arose to travel and experience the treasures of the East first visiting Laos in 1968 during the Vietnam War upon the invitation of the neutralist Prime Minister of the time.

Later that year she ventured to Bali. Both countries had a major impact upon Couteau, the vivid colours and light, the overwhelming sense of the spiritual, and the gentle natured people.

Couteau’s ouvre developed from pencil, charcoal and pastel sketches to oil paintings in subtle colours, or in her dynamic, fauvism inspired palate. Her compositions progressed, some into complex, futuristic works of the universal totality of nature revealing the sparkling cosmos, men and women depicted in harmony, and stunning landscapes with backgrounds of flowing patterns, similar to exotic textiles and batiks. Abstract and surreal elements were always key to the strength of her larger compositional works.

Couteau’s depictions of the Balinese, especially the woman challenged the stereotypes, presenting distinct messages without an agenda. Her woman’s worldview resonated with humanism, was non-sexual, while understanding and accepting dissimilarities and highlighting equality of identity. Couteau reconfigured the visual narrative regarding women who are often misinterpreted or unacknowledged. Her feminine approach never exploited the beauty of a woman’s body.

Her painterly responses to Bali’s potent, unseen worlds are indeed intriguing. What prevailed was her unrivalled ability to capture the ‘spiritual’. Couteau’s magical scenarios and figurations glow with an unusual, yet distinct atmosphere – her otherworldly creatures often gaze out from the canvas with mysterious, shamanic eyes. Some of her impressions of Balinese characters stand alone within a historical descriptive context. In “The Old Lempad” depicting the famous architect and modern art master I Gusti Nyoman Lempad (1862? – 1978), he appears as an alien-like figure, in an after life manifestation. Her portrait of the extraordinary young painter Made Sukada (1945-1982) depicts a face beaming with love, intelligence and light, his glowing eyes reveal the presence of a wise and old soul.

Attuning with the metaphysical forces and pure potential her work stylistically evolved – transcending into the mystical. Her depictions, real and imagined, of Bali life in her fresh and fascinating manner distinguished her from the acclaimed painters who preceded her, along with her peers, defining her as one of the most outstanding expatriate artists on Bali.

Couteau exhibited extensively from 1960 – 2000, in Italy, France, Germany, Greece, Switzerland, Vietnam, New York and Bali. Her talents extended to writing books and theatre, designing and making sets and costumes for performances. In a tribute to the visionary artist who passed away in Paris in 2013, seventy of Couteau’s works were displayed at the National Gallery of Indonesia, in Jakarta, early in 2018. 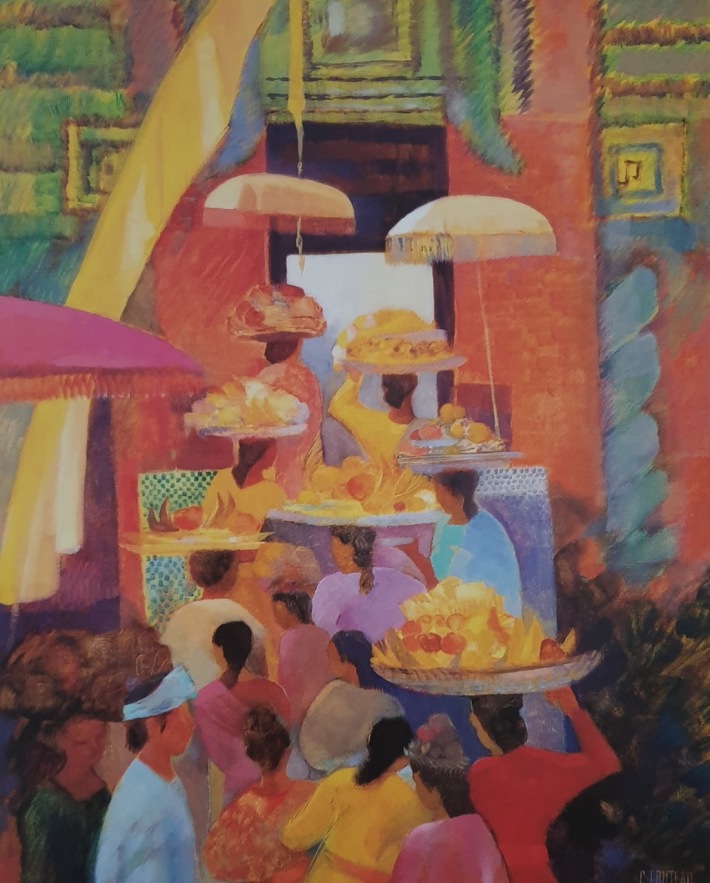 Entitled “The Orient and Beyond” her exhibition was a collaboration with Institut Francais Indonesia. Couteau’s works are collected by museums in Paris, Lyon, Berlin, Venice, Bulgaria and one of her beautiful Bali inspired paintings is on permanent exhibition in Ubud at the Agung Rai Museum of Art (ARMA). 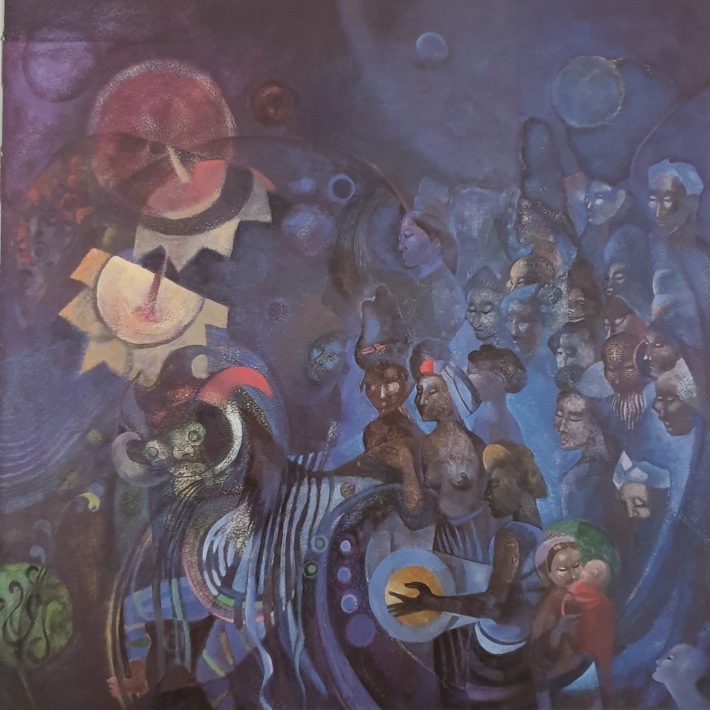