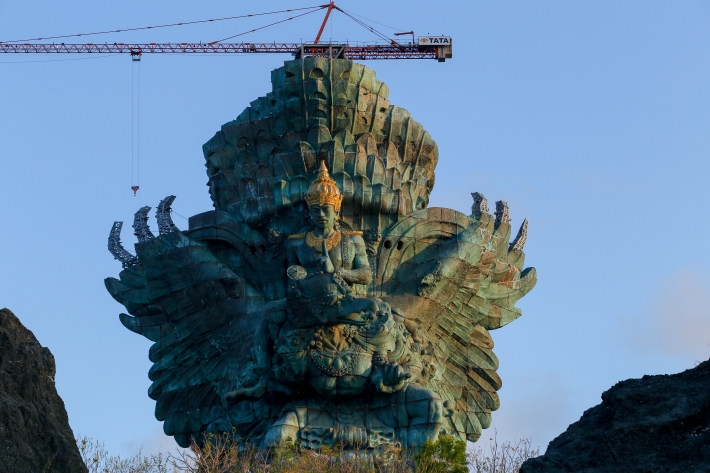 The epic tale of the Garuda Wisnu statue at the Garuda Wisnu Kencana (GWK) Cultural Park in Jimbaran, South Bali will soon reach its finale. In a monumental saga that stretches back to its conceptualisation in 1989, including the on and off progress of its construction, the sculptures creator, Balinese artist Nyoman Nuarta, has confirmed the project will be completed in early August.

“By the 4th of August this extraordinary combination of art, technology and science will be complete,” Nuarta recently announced. “This nation will have a new cultural icon, that, despite taking more than 28 years, and without help from the Indonesian governement, showes that private sector can contribute greatly to the nation and state. It is a special gift to celebrate the nation’s Independence Day on the 17 August, 2018,” added Indonesia’s most celebrated sculptor.

Originally scheduled for completion in March 2019, in mid 2017 Nuarta was given a new deadline by the Indonesian government. The statue, which is the second tallest in the world, must be finished before October 2018 when IMF and World Bank delegates converge on Bali for their annual meetings to be held 8 -14 October. As a part of their itinerary a dinner will be held for the delegates at the GWK Festival Park, a vast field surrounded by limestone cliffs, within the sprawling 60-hectare cultural park.

In April a special ceremony officiated by the Governor of Bali, Mangku Pastika celebrated the installation of the statue’s 529th module, the Mahkota Dewa Wisnu – the 3.5-ton crown of Wisnu that is covered with gold-platted mosaics. A total of 754 modules of the statues outer skin, made of copper and brass sheeting, each weighing on average 800 kilograms, complete the installation.

The project has occupied as many as 120 experienced wielders working on site to re-assemble the modules before they are lifted up by two cranes and bolted onto the outer steel frame of the statue by workers who specialize in high altitude construction. “During the initial stages of the statues design there was no available technique to enlarge the difficult and complicated three-dimensional forms, nor was there any computer software that could do this,” Nuarta said. “Therefore, I had to find the solution to the problem. Finally, in 1991 we found a theory, and along with the birth of Autocad software we could move forward.”

Rigorous scientific integrity testing has been undertaken on all the construction materials and the statue itself, even taking earthquake resistance into account with the pedestal being able to withstand up to 8 on the Richter scale. Wind tunnel tests have indicated the statue, the largest in Indonesia, could withstand winds speeds of up to 259 nautical miles per hour.

Standing 121 meters at the top of the Ungasan ridge, 271 meters above sea level and with a wingspan of 64 meters, the skin surface area of the statue reaches two and a half hectares or 25,000 m2, during the evening the statue will be a unique feature of the cultural park with its special lighting arrangement that was built-in Singapore. The statue will sit on a pedestal, or building base, which will function as a restaurant serving up to 500 people. There will also be a museum and a viewing gallery that will allow panoramic vistas of the rest of South Bali.

“The target is to attract 6,000 tourists per day,” Nuarta said, then continued. “Hopefully, Garuda Wisnu Kencana will serve as a reminder to Indonesians and the international audience, throughout this divisive period about our cultural roots as a tolerant and multicultural nation.”