Combining meticulous drawing with realism painting techniques, Adi’s symbols, figures, and forms, rendered upon a framework of geometrical designs, come alive in compositions that are mysterious, and futuristic. Within his works the visual information often resonates out from one central point – distinct lines emanating from the canvas’ core – while other lines, both vertical and horizontal, create grids of triangular, fragmented portions. What appear like kaleidoscope visions are in fact perfectly balanced compositions achieved through the execution of a clever and systematic, visual formula. 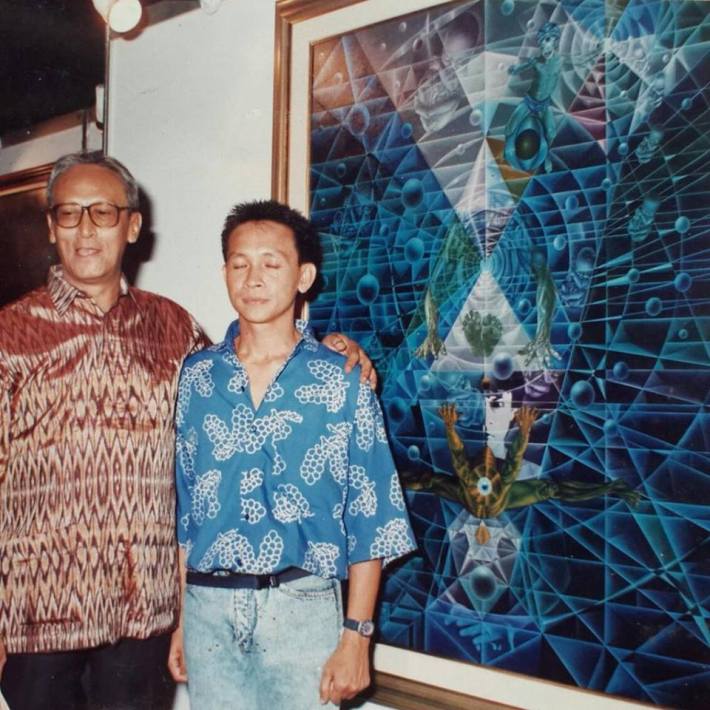 Otherworldly scenarios reveal abstract forms, spherical, planet like objects, and enigmatic symbols floating within interstellar backdrops. The artist often depicts himself in various stages of life: from the embryonic, to the baby, and then the adult. Adi’s paintings are insights into the enigmatic nature of life and its place within the order of the cosmos.

“My work reflects my quest for meaning in the perfection of human life. They simply mirror life itself, while underlining the fact that there is much more going on than meets the eye,” Adi says.

Gifted with unique ability, and a powerfully inquisitive mind, Adi, who was born in 1957, was raised in a multi-religious family in Jember. His mother a follower of the Catholic faith, his father a Buddhist, while his brother a Muslim. Religion is one of the significant forces that shape the Indonesian cultural discourse, yet spirituality is the key dynamic within Adi’s life journey, and how he constructs his worldview.

“From an early age I practiced my own techniques of exercise and meditation, yet it was not a traditional style of yoga, rather a personal act that achieved strong feelings. Later I chose to bring the Buddhism doctrines into my life. Not because I believed it to be a superior religion,” to the contrary, the artist said, “I was allowed to feel a personal sense of harmony.”

Living in Bali proved to be a perfect environment for the artists’ deep and reflective nature. His stoic work ethic balanced, while immersed within the Balinese culture, and the creative energy that island is internationally renown. In 1991 Adi’s third solo exhibition was held in Ubud. He continued to exhibit consistently in national and international group exhibitions, and with leading galleries in Jakarta.

Along with other artists during the 1990’s Adi was one of the forerunners of a new realism movement that was evolving within Indonesian contemporary art. Photography became a crucial part of his technique. A special part of his process, however, is to travel, experience, be still, and observe.

“Meditation not only gives us the light of insight, but also the power for expansive change,” Adi says. “By having faith in our spiritual journey we both may learn and will be provided the tools to steer us through the physical and non-physical labyrinths that encompass us all.”

A strong sense of innovation has driven Adi’s artistic development, he incorporated digital art collage, and the use of pencil in his works well prior to his fellow contemporaries. His depiction of iconic characters such as John Lennon, the Dalai Lama, and Buddhist monks as central subjects in the compositions occurred well before it became a national trend.

His process of self-discovery is reflected in the changing colors Adi has utilized during his career. His work is witness to his transformation of spirit; his darker colors during his younger days reflect an unsettled conscience in the process of self-analysis. Lighter, and brighter colors mirrors the easing of internal tensions during his personal growth.

Unlike other Asian cultures, Indonesian art does not have a tradition of drawing. Lead, charcoal, pastel and colored pencils, for the past two decades, have become Adi’s exclusive mediums of choice. The technique he chooses is not only the application of line to give structure and form, rather a method influenced from photographic images, to build form via the subtle, and painstaking use of line to suggest elements of skin tone, facial and body features. 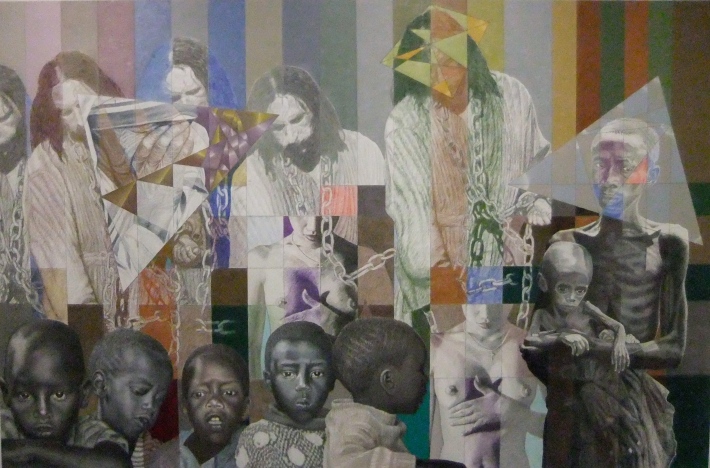 “Within the mind of the photographer, second-by- second, essential elements come together,” Adi says. “Composition, lighting, character, and sensitivity for the object, all fuse within an instance, to capture a special moment. ”

Photography has had an unparalleled impact on modern and contemporary realism art, as well as Sutjipto Adi’s. His drawing technique bursts into life with the inclusion of bright colors and hues from colored pencils and pastels. While the majority of Indonesian contemporary art draws it techniques and themes from outside and the West, Adi is unique within the canons of Indonesian art. If you travel abroad to see the finest museum collections of modern and contemporary art, such a technique cannot be found.

In his depictions of the human form Adi deliberately presents both the old and the young side-by-side; a tiny baby contrasted with an elderly monk, or his young son positioned along with himself. While its important to include the iconic figures, he too includes the other ‘heroes’ – the normal, everyday people, and the poor, who endure, and soldier on through life.

“My intention is to present these figures as archetypes of faith,” Adi says. The metaphors he conveys are an essential message about life itself.   “The youth of today’s world require good role models, fine examples of behavior, moral courage, and strength to successfully ‘navigate’ the journey of life.”

As he has matured Sutjipto Adi’s paintings have become less esoteric, and easier to read, yet always ‘speak’ of the human spirit. They are profound, and important messages of hope. 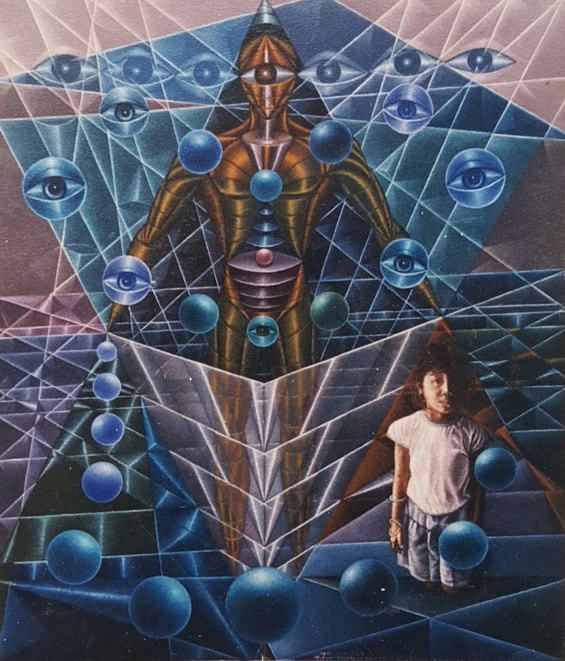 *Author’s note: No part of the written content of this website may be copied or reproduced in any form, along with links uploaded to other websites, for any commercial purposes without the written permission of the author. Copyright 2020