A historical collaboration between the Udayana University of Bali and the Bentara Budaya Cultural Center Denpasar on Friday 15 April highlighted a landmark event in Balinese painting presenting the works of master artist Ketut Budiana. Officiated by the Governor of Bali, Made Mangku Pastika, the exhibition is titled “King Udayana : A Visual Epic”.

The exhibition features an enormous narrative canvas, the dimensions of 8339 x 140 cm spanning the walls of the exhibition pavilion. The story pays homage to the 10th century king Udayana Warmadewa, known as one of the earliest historical figures of ancient Bali. His identification as the father of the famous Airlangga, the hero-king of Java, has led him to be the prominent figure in Balinese history in par with ancient Java. As the result his name is associated with Balinese past greatness.

The painting’s storyline includes the cycle and stages of life according to the Balinese philosophies. Art critic and historian Jean Couteau states, “Budiana “talks” of Udayana’s birth in Bali, education in Java, and union, through his son Airlangga, of the kingdoms of Bali and Java. His portrayal of the king’s life story is a “model” of how the Hindu-Balinese ought to manage the four goals of human life (Catur Purusa Art): dharma-virtue, kama-desire, artha-earthly goods and moksa-the ultimate melting in the cosmos. Humans must properly combine these “goals” of life in the four stages of their life.”

This exhibition both glorifies the past but also reflects on the contemporary at the same time hoping for a brighter the future for Bali. The painting reflects the Balinese people’s philosophical approach to life while also appearing in form similar to the traditional Kamasan paintings that were often created on long single rolls of cloth. The opening was attended by delegates of the Balinese government and Udayana University and members of the Bali and Indonesian art community who were treated to an interpretive dance performance by students from the Udayana University . 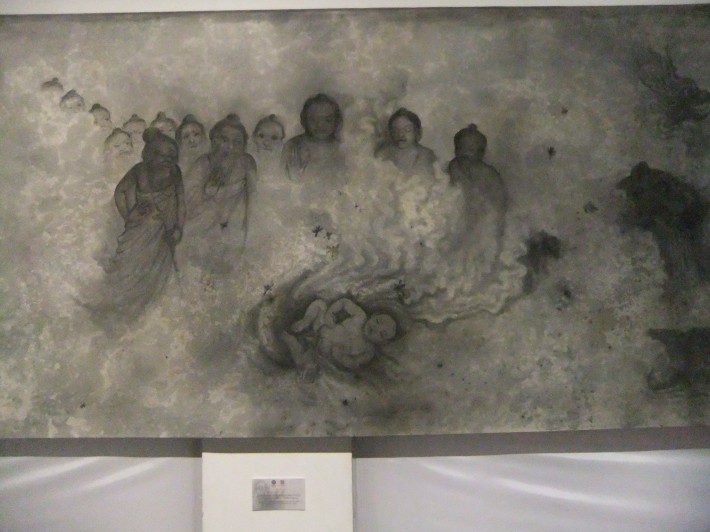 After the exhibition at the Bentara Budaya Bali, which finishes 22 April the paintings permanent new home will be on the higher walls of the rectorate’s main hall in the Udayana University in Jimbaran, and will be open to the general public. Stories about Udayana and his administration have not been so well known to the public.

The greatest Balinese artists are those who experiment with form, composition and materials, while interpreting the narratives and infusing their artworks with their own character and style. Except for Bali’s first modern artist, the iconic architect + artist Gusti Nyoman Lempad (1865? -1978), no other Balinese artist has forged a path of such unique quality as has Ketut Budiana, who’s sketches are often compared with Lempad’s. 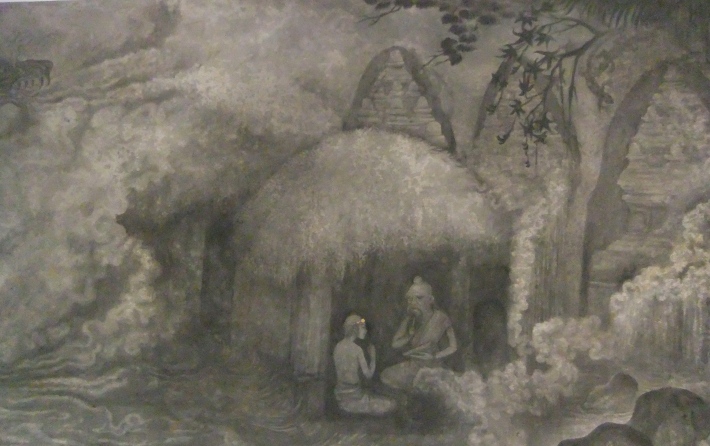 Born into a family of master artisans in the village of Padang Tegal, Ubud in 1950 Budiana is highly skilled as a sculptor and architect, and specializes in making scared temple images, ceremonial masks and sarcophagus for ritual cremations. A former art teacher, he studied art at SSRI, the Indonesian School of Art in Denpasar and briefly with renowned Dutch painter and architect Rudolf Bonnet.

Budiana began painting in the early 70’s and exhibiting from 1974 and has shown his work in 8 foreign countries while he has won a string of local and international awards. He has been active as a curator at Ubud’s Museum Puri Lukisan from 1986 – 1990 while serving in 1990 as a curator at ARMA museum, and has contributed numerous articles and essays to various publications. Budiana has regularly exhibited at Bentara Budaya Bali while also exhibiting at Bentara Budaya Jakarta and Yogyakarta.

Budiana invites the audience to wonder clockwise around the pavilion to engage with this poetic masterwork. Budiana’s work is laid out in such as way as to occupy the four directions of the compass, with their respective gods, and colors, symbolically linking the human existence with the cosmos Often described as a “fantastic’ painter” Budiana communicates stories that appear to come from the subconscious in dream like imagery.

Paintings appear as a swirling mass of waves, clouds and non descript forms – a world of seething movement. On closer inspection, however, his images and shapes undergo strange and unexpected transformations, coalescing into fantastic yet monstrous and even grotesque figures. This movement and transformation reflect the fluidity and infinite essence of the universe continually being reformed and recreated.

His works contain confronting figures of power – desire, destruction, energy and force – yet desire and destruction are both essential in the material world and inescapable. They are a part of the nature of matter, at the center of the mystery of life itself. Budiana’s work draws the observer to a deeper encounter with the self, so they may distinguish that all of the dark, threatening and monstrous imagery suggested in his paintings is a reflection of the self.