Of all of the genres of Balinese modern traditional painting that evolved from the 1930’s and onwards, helping communicate the richness and diversity of Balinese culture to the world, the Batuan style is the most celebrated. Nowadays, both local and foreign art lovers always warmly receive Batuan exhibitions in Bali.

“The Paintings of Batuan – Wow!!” the latest exhibition by Batuan’s Baturlangan Artist’s Association did not disappoint the large crowd attending the opening at Ubud’s Puri Lukisan Museum on 17 October. Featuring the work by 49 village artists, both male and female, spanning all generations including names such as Bendi, Budi, Sadia and Padma, along with some deceased artists, the exhibition reveals that the Batuan style is continuing to evolve. Of particular interest is the talent displayed by some of the younger members, confirming that the recent emphasis upon regeneration is exposing some exciting future prospects.

In 2012 the Baturlangan collective began in earnest to reinvigorate the spirit of the tradition of Batuan painting that some members of the community had felt was in decline. A renewed sense of enthusiasm and commitment to their heritage by the artists has given birth both a clear vision for the future and a structured agenda of activities that includes one major annual exhibition, other collective painting projects, and more formal and non formal artist discussions.

“The objectives of Baturulangun are to preserve and develop Batuan painting, while promoting the spirit of the artists work,” says the head of Baturlangan Made Sujendra. “We wish that in the future our style will became more dynamic and we trust that the young members can inject fresh imagination, dynamism and innovation to stimulate the development.”

“The young artists are very passionate about their work and I believe there is some excellent future prospects,” Sujendra adds. “Not only do they maintain strong technical standards yet they are developing their themes and concepts as well. This can especially be seen in the work by Budiarta and Aris Sarmanta.”

“Seperti Tercerahkan” (like enlightenment) 2015, is Budiarta’s observation of the impact smart phone technology has upon Balinese youth. His acrylic paint on paper work mimics the famous image of Gautama Buddha sitting upon a giant lotus flower in a state of divine perfection. Budiarta, however depicts a youth in traditional costume perched upon a lotus who is not glowing with light, yet appears to be carrying an enormous weight upon his shoulders. While clutching in both hands and engaging with a smart phone circulating above him within threatening clouds, as if manifestations delivered upon the hands of the gods are the cherished icons that dominate popular culture and communication technology of FaceBook, Twitter, Google, Blackberry along with other associated brands and e-communication symbols.

Budiarta’s composition is focussed and minimalist, more so than the usual complex and crowded Batuan paintings. His theme is highly imaginative and communicates clearly his lament of the phenomenon he is witnessing of changing cultural values and people’s obsession with hi tech modern consumer gadgets.

Aris Sarmanta’s “Pohon Kehidupan” 2015, (Tree of Life) on the other hand is a remarkably detailed execution of a traditional work with his modern conceptual adaptation that reveals maturity beyond the artist’s years. The painting is divided into to equal halves, of both the earthly and heavenly realms, underlining the Balinese Hindu philosophy that emphasizes duality and that all life is a complex inter relationship between negative and positive forces.

The composition reveals the core principle of Balinese traditional aesthetics – balance and harmony – that are also the fundamentals to the Balinese way of life. “The tree is a universal symbol that is central to many cultures. Trees provide essential sustenance to all living creatures,” Aris Sarmanta says. “Forest destruction is not only an important issue for Bali, yet has global relevance as well. Without trees what will happen to us?”

The tree trunk supports the upper world where the artist depicts narratives that tell of traditional life, and a world in peace and harmony. The trunk resembles a human face stylized from a Balinese traditional mask that has positive and negative features. The world depicted in the lower half of the painting, while being more dynamic also includes the influence of modern culture. Central to the narratives depicted are the wisdoms and teachings that are being shared to the community by a Balinese Hindu priest.

“As a young artist within a large collective my experience in Baturlangan has been very positive and memorable,” Aris Sarmanta says. “I am especially pleased to receive sound guidance and encouragement from many of the senior artists, along with learning more of our cultural narratives. Bautan painting is my inheritance and I must work hard to preserve and develop it so I may be proud of my contributions.” 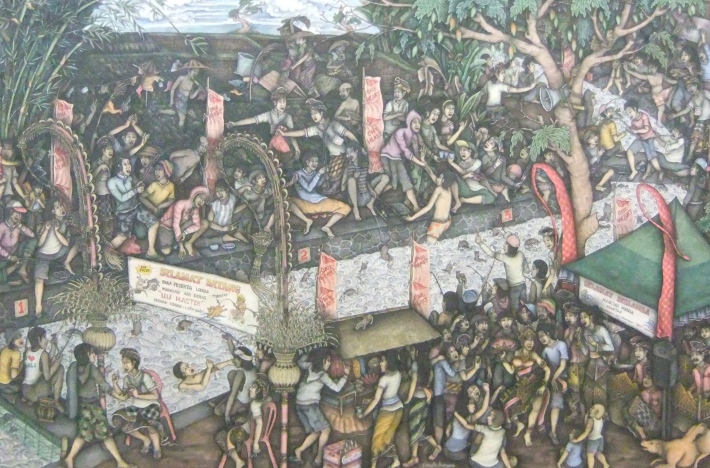 Batuan paintings have survived through the highs and lows of the political and economic climates Bali has endured over the past eighty-five years. Its early formative years were boosted by the unique patronage of two of the 20th Centuries leading anthropologists, Margaret Mead and Gregory Bateson who lived in Batuan from 1936-1938. The years up until the 1940’s were considered the golden years of Batuan painting and a distinctive style became the hallmark (often of dark and mysterious images of both their unseen, and the tangible worlds).

Popular with art dealers and tourists at that time they found homes throughout the world until WWII and the Japanese occupation of Indonesian that led to the decline of tourism along with the demand for the paintings. Fast forward seventy years to the present and a globalized world, where tradition stand in the face of modernity. It is comforting to know that the future of this renown style of painting is in the secure hands of the Baturlangan.

Continues through until 12 December at