“I approach every magical day here in Bali with gratitude and wonder. Gratitude for having the joyful privilege of living on the gorgeous rice fields north of Ubud,” says Canadian avant-garde filmmaker and photographer Joel Singer who first visited Bali in 1979 and has lived here for the past decade.

“I usually awaken with the sunrise and have an early morning walk with my dogs out on the stunning terrain of the Campuhan Ridge,” he continues. “I’m always photographing daily life around me and images continually coalesce in my mind – likely and unlikely juxtapositions.” 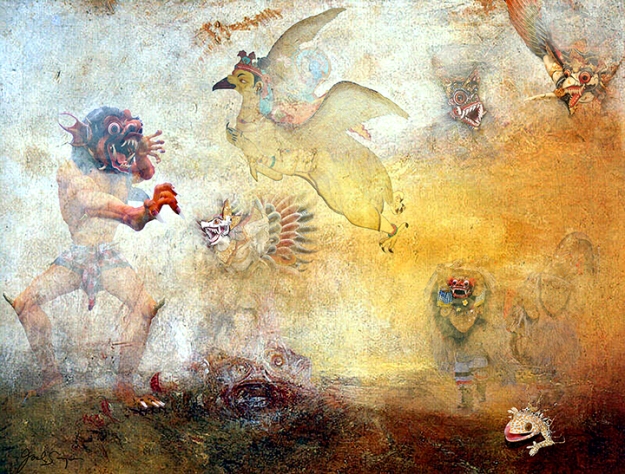 “About seven years ago I was struck with a blast of realization while watching the golden evening light on the ripening rice fields,” explains Singer whom since the mid-1980s has experimented with cut and paste photographic collages. (long before the advent of Photoshop, the popular digital image manipulation computer program)

“I was then vividly reminded of some of the “Hudson River School” paintings, (the mid-19th-century American art movement of landscape painters influenced by Romanticism) and later during the rice harvest I was reminded of some of Breugel’s work.” (Pieter Breugel (1525 –1569) was the most significant artist of Flemish Renaissance painting who pioneered large compositions depicting landscapes and peasant scenes). 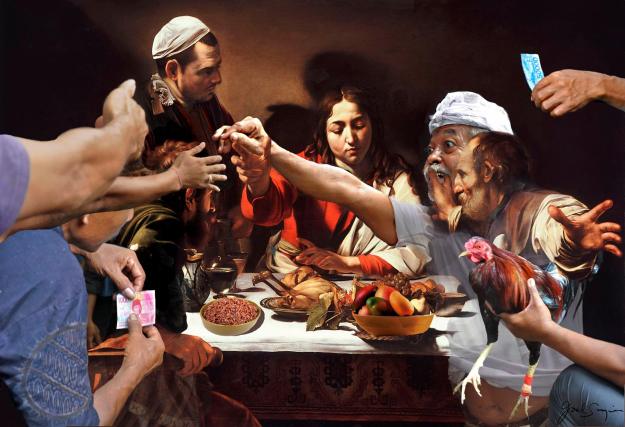 Bali Carrivagio (or the Feast of the Cockfight), 2019  – Joel Singer

“Then with the magic of Photoshop, I began to work with some of the images of the Old Masters paintings combining them with images of Balinese daily life. It seemed like an inevitable fit and I’ve continued to explore this merging ever since into creations I termed many years ago “PHOTAGES” describing my process of photo – collage – montage.”

Singer’s series “When the Old Masters Visited Bali” pays homage to the master European painters. In “Bali of Gold” multiple images of musicians and dancers are married with an abstract background of swirling energy and colour made famous by the iconic English landscape painter JMW Turner.

While in “Bali Caravaggio (or the Feast of the Cockfight)” he fuses two disparate worlds – gesticulating audience action images from a Balinese cockfight layered upon a composition by Caravaggio where men are sitting at a table engaged in animated discussion prior to a chicken feast. Darkness contrasts with light, emphasizing Balinese Hindu philosophies, and of course the visual technical prowess of the Renaissance maestro. Another composition features the smiling face of Mona Lisa on the surface of a flooded rice field that is reflecting the morning light, her raised finger points to the shining sun. Singer delicately fuses humour with natural beauty creating a heart-warming composition.

Humour again comes to the fore in his pairing of dancers from Matisse’s famous “Dance 1” with the frightening demonic creatures that star in the Balinese Ogoh-ogoh parade, together frolicking hand-in-hand in a circular romp. Other compositions are meetings of the Balinese landscape with rural and cultural activities that are either immediately arresting, or simply gracious and eternally beautiful.

“When I ‘go to play’ up in my loft in my house overlooking the rice fields I try to surprise myself. To give vision to my dreams and the spirits which inhabit this place. I trust my intuition when approaching a ‘blank canvas’ and now, after 50 years, my ‘editing’ skills learned through filmmaking and skills of the juxtaposition of sometimes unlikely images are more finely honed with every passing year,” he says of his creative process. “I refer to my work as ‘images of elsewhere’. I play with time and sequencing, creating ‘eye music’. There is something about the timelessness of experiencing archetypal rural life, the rhythms of the planting and harvesting seasons suggest a blending of aesthetics.”

Born in Montreal, Canada in 1948 aged 12 Singer discovered the fascination of image-making. Later in college, he majored in fine arts and encountered the magic of film and cinema. He then yearned to participate in the great renaissance in avant-garde cinema stirring in the U.S.A. A film history class taught by the poet/filmmaker James Broughton (1913 – 1999) at the San Francisco Art Institute in 1974 then changed his life. During the 70s and 80s Singer showed his avant-garde films around the world while collaborating with his, then life partner Broughton, many of their films were collected by institutions including the Museum of Modern Art in New York, and the German Filmmuseum in Frankfurt and the Austrian Filmmuseum in Vienna.

Singer gives us insights into the natural rhythms of life via his fresh and fantastic windows into the extraordinarily diverse visual and cultural, multi-dimensional worlds of Bali. “I’m not interested in the slightest in ‘reality’, it’s HIGHLY overrated,” Singer states.  “My desire is to make the invisible somehow visible through the magic of creating another ‘separate reality’. Through my work, I hope to bring some beauty into this very troubled world.”

A selection of Singer’s pictures is currently on display at the Tony Raka Art Gallery, in Mas, Ubud.