Few people, let alone Indonesian artists, have the opportunity to experience and engage in the remoteness, grandeur and soul of the landscape of the Northern Territory (NT) of Australia. Traveling in the region not only requires commitment and preparation, yet also in certain cases, special permission from the authorities. Gaining the deepest insights into the character and wisdom of the environment is only possible along side the aboriginal people.

In June 2015 six Indonesian artists ventured from Denpasar to Darwin and then traversed an array of “outback” situations by car, plane, boat and on foot, stopping along the way to paint and sketch, during the 2015 Artist’s Camp. For five weeks Made Budhiana, Wayan Wirawan, Made Sudibia, Made ‘Dalbo’ Suarimbawa and Ni Nyoman Sani from Bali, and East Javanese artist Suryani were exposed to foreign lands and societies and delved creatively into new visual and conceptual territories. They visited and stayed with diverse aboriginal communities where they learned about the local cultures, while also painting with the local artists.

“In the Darkness of the Night”  –  Made Budhiana

Some of the fruits of this extraordinary engagement went on display in “Cruise Control Indonesian – Top End Artist’s Camp Exhibition” open 23 January until 13 February 2016 at the Northern Centre of Contemporary Art (NCCA) in Darwin.

Featuring works by the Indonesians, Australian painter Rupert Betheras, who accompanied part of the Artist’s Camp, and collaborations between Betheras, Budhiana and Aboriginal artist Lionel Possum, according to NCCA Director and organizer of the 2015 Artists Camp, Maurice O’Riordan, “The exhibition is hung more along the lines of a place, attempting to give a sense of the environment encountered by the artists, rather than a grouping of individual works.”

The biannual Artists Camp, which was first held in 2012 in the NT, and then with two subsequent Camps in Bali (2012 & 2014) is the initiative of Australian art lover Colin MacDonald and Made Budhiana, working with the NCCA, expanding upon the original modal of the Artists Camp that first began back in 1978.

Traveling as far as Alice Springs, 1,500 KMs south of Darwin, experiencing the shock of an outback desert winter, and across waters north to Melville Island, the Artist’s Camp was both a physical and metaphorical journey. The artists developed strong connections with the aboriginals whose culture is not unlike their own, being deeply rooted in the environment and the spiritual world, while similar universal cosmological views. The Balinese artist’s sensitivity to nuances of the physical and the non-physical worlds translated into potent intuitive works, confirming that despite the geographical and genetic differences involved, there are many similarities as well.

The Artists Camp was Wirawan’s second visit to the NT, his expressive works “Munupi” & “Pukumani Pipes” painted on Melville Island (where the artists were guests of the Tiwi Aboriginal community of Pirlangimpi) are evocative and moody. “I was inspired by the aura and mystery communicated by the Pukumani Pipes (burial poles) and the area in which they erected. How quiet and serene it was,” he said.

This was Suryani’s first experience within the raw beauty and wilderness of the NT. “Beswick-Darwin” features red, green, blue and white dots pulsating upon a black background, capturing the primal essence of the environment. Renowned abstract painter Budhiana has visited the NT on several occasions, “In the Darkness of the Night” captures his nocturnal observations of the aboriginals and how at night the greater spirit of the people becomes evident. Sudibia and ‘Dalbo’ also contribute powerful semi abstract impressions of their experience, while Sudibia’s two “Untitled” renderings of people set amongst the landscape are outstanding.

Installations by Wirawan and Sani provide contrast to the sketches and mixed media works on canvas in “Cruise Control”. Wirawan’s “Buaya & Raganda” provides a light-hearted encounter in the meeting of two individual icons of Bali and the NT.    Sani, Bali’s most prominent, multi disciplined female artist, delved into music and photography, as well as painting while in the NT, yet her installation “Sound of the Heart “ reveals her imaginative depth and passion and for fashion design – a costume dripping with colorful acrylic paint creates an abstract composition on paper, positioned beneath on the gallery floor. 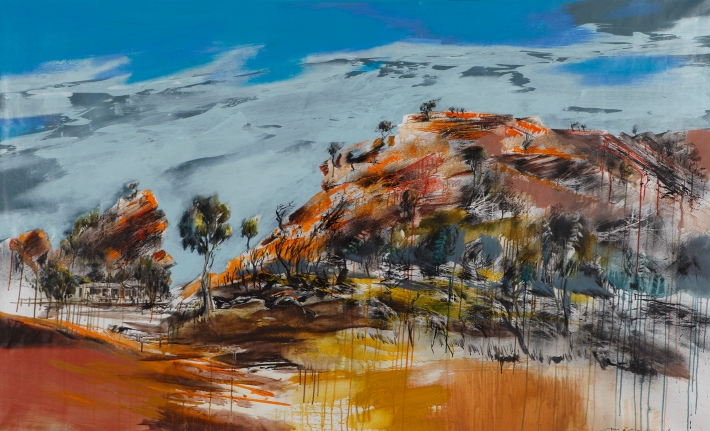 The Indonesian Consul to Darwin Andre Siregar, and the Chief Minister of the NT Government Adam Gilies opened the exhibition. “My government is committed to a vibrant ongoing relationship with Indonesia,” Gilies said. “It is a relationship not built on trade alone, and the Artists’ Camp 2015 is part of our commitment. Art and cultural engagement is genuine and enduring engagement.”

The vision of the Artists Camp (sponsored by the Commonwealth Bank Indonesia, the Australia Indonesia Institute and Indonesian Department of Foreign Affairs) is that in nine years time the Chief Minister of the NT, the Australian Prime Minister and the Indonesian President will open a touring exhibition at the Australian National Gallery that will include the first retrospective of the Australian Indonesian artists engagement. 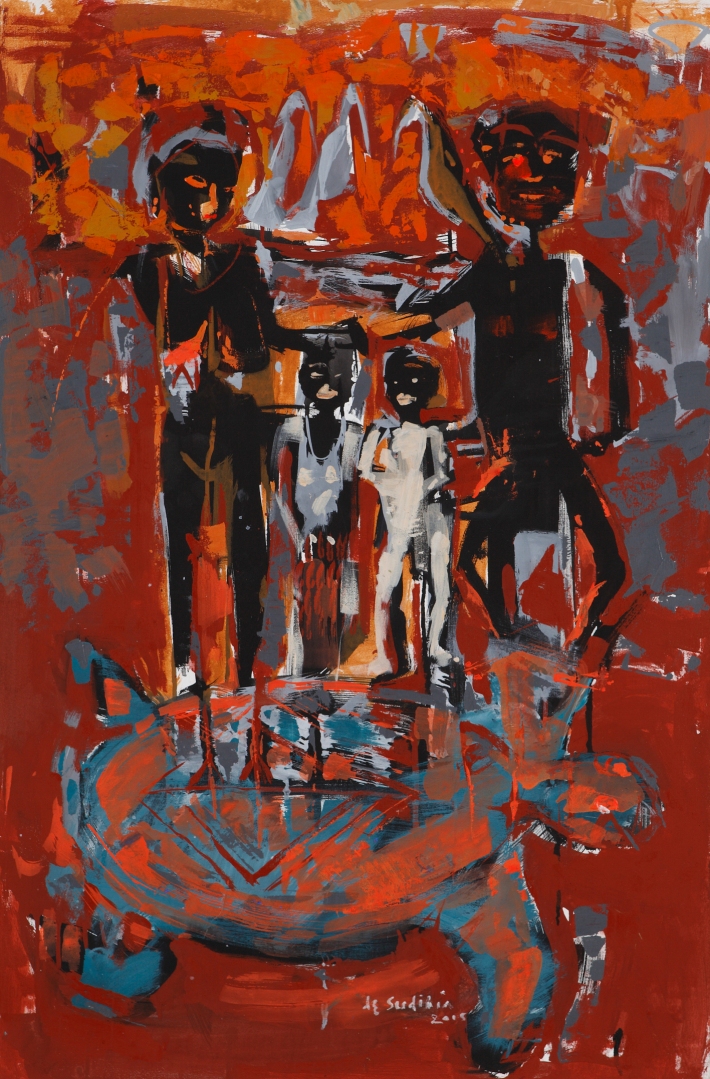 Made Budhiana painting on location at Kata Juta 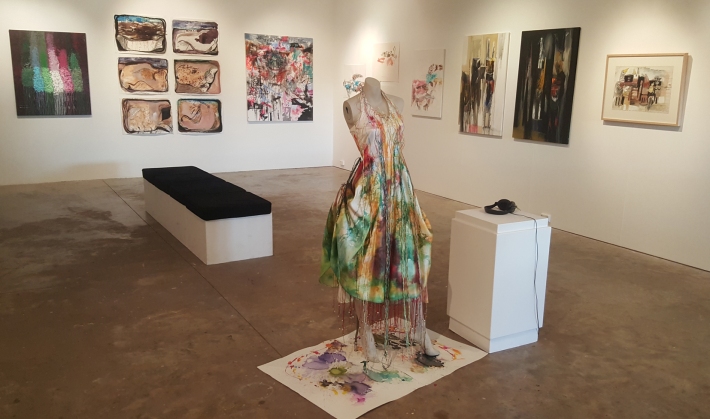 Center Nyoman Sani’s installation “The Sound of the Heart” 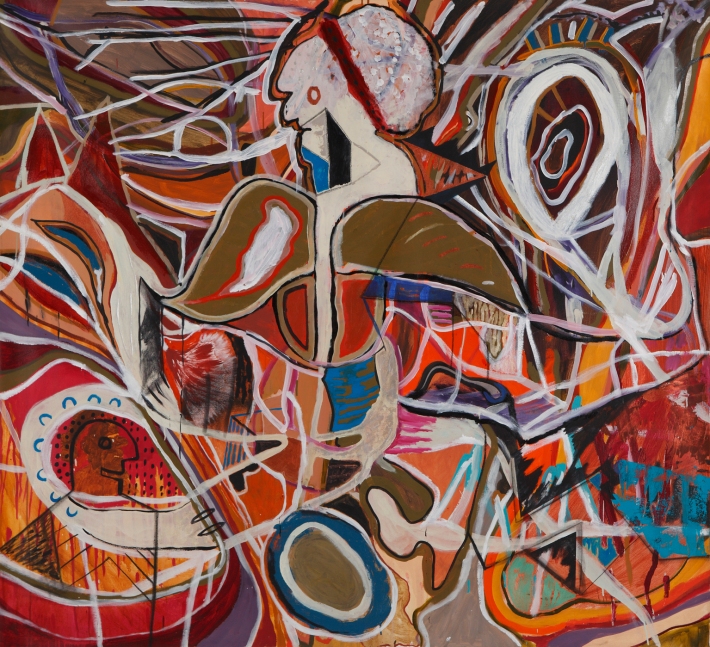